Ask most Brooklynites where Grand Army Plaza is and they will give you an answer, even if they have no notion of what Grand Army the plaza commemorates.  It is the area just before the entrance to Prospect Park, where Flatbush and Eastern Parkway divide.  One passes it all the time on the way to the greenmarket, the central library, the museum, or the botanical garden.  The other day I was in Manhattan on some non-Civil War related business when I came across the “other” Grand Army Plaza, the one virtually no New Yorker, however proud, would be able to identify as such.  I intend to do a more systematic series of posts on Civil War statuary in New York this spring and summer but couldn’t resist sharing a few snaps I took on the last day of winter 2011. 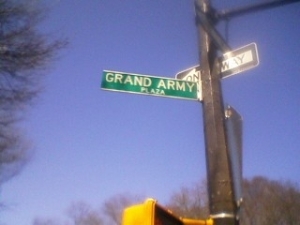 The plaza is at the corner of Fifth Avenue and Central Park South. 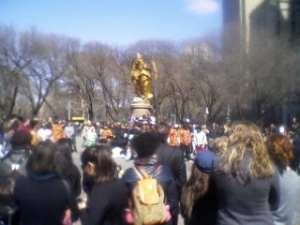 It was a crisp, bright day and there was a sizable crowd watching some street performers.  In the background is the General Sherman statue. 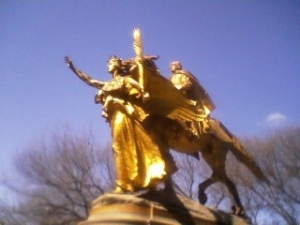 Most famously the two worked together on the Robert Gould Shaw Memorial which sits in Boston Common.  When I was in Washington two weeks ago I saw the plaster mold that the National Park Service has loaned longterm to the National Gallery of Art.  One can see the similarities. 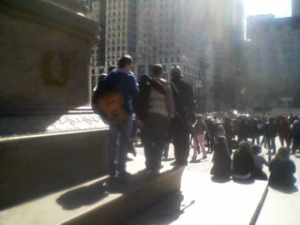 Whatever the season this area just outside Central Park is always a happening spot.

That’s the Plaza Hotel in the background.  One reason the statue works so well is because it fits proportionally into its surroundings.  Saint-Gaudens and McKim hoped to put the work just outside Grant’s Tomb, but Sherman’s family disapproved.  The tomb and this statue are both representative of the City Beautiful movement.  Saint-Gaudens’ final masterpiece was dedicated in 1903, six years after Grant’s mausoleum.

I often wonder if the men and women of the Civil War era could have imagined the multicultural twenty-first century America they helped bequeath to us.

Thanks for checking in.