The Hayfoot and I were walking across the Mall from the National Museum of American History yesterday on our way to the FDR Memorial when, crossing Independence Avenue, we heard a tap-tap-tapping sound emanating from the direction of the Martin Luther King Jr Memorial. The MLK statue is one of those disasters so jarringly off in its size and scope, so inappropriate for the man it is meant to honor, so . . . wrong, that it is almost magnificent. Its inappropriateness was all the more obvious after having just left the museum, where we had just seen the “Changing America: The Emancipation Proclamation, 1863 and the March on Washington, 1963″ exhibit.

The tapping we heard was somehow appropriate for the still new memorial: it was the engravers chipping away the original, paraphrased “drum major” inscription that angered so many. A ranger told us that the work is all but complete, and that the finishing touches will be in place in time for the fiftieth anniversary of the March on Washington in a few weeks. 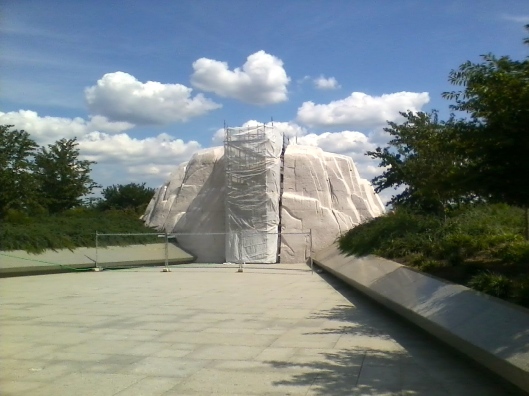 MLK Jr Memorial from rear, with scaffolding and covering, 5 August 2013