Yours truly was up and out of the house early yesterday on his Sunday morning for the annual Hackensack Toy Soldier show. Getting there is indeed half the fun. It involves a subway to 42nd Street followed by a walk across an all-but-deserted Times Square, to the Port Authority for the 8:30 bus to New Jersey. What I love about these shows is that you never know what you are going to see, or what it might be even if you bring it home. Here are Exhibits A, B, and C.

When I was looking through a case of pins and whatnot, the lady said I could choose any three for ten bucks. So, I chose these. 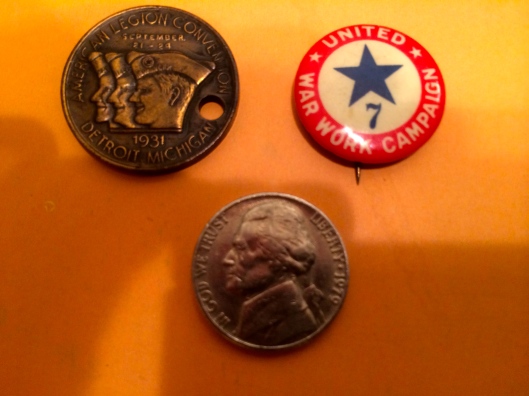 The first is from the 1931 American Legion convention held in Detroit in September 1931. I am not sure what purpose it served, but the hole is part of the original. This is common in such tokens. Surfing the internet, I learned that President Hoover himself addressed the legionnaires. Here is a photo from the convention. I love the sign for the Cadillac Hotel. Who brought the token home from Detroit, and how did it eventually find its way to a vendor table in Hackensack, New Jersey? I’m just glad he held onto it. 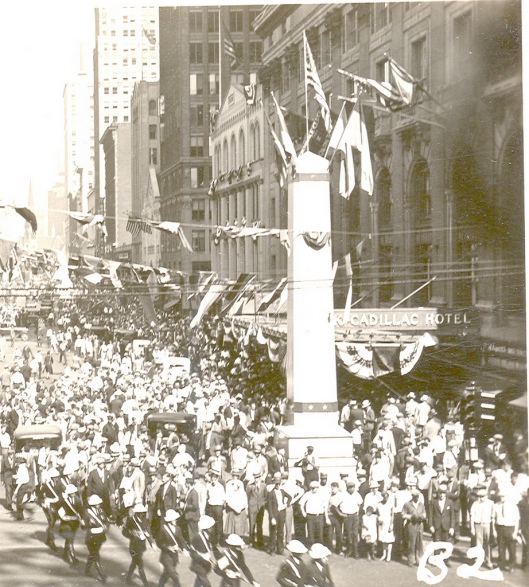 I have always been a big tchotchke guy. In these years of the sesquicentennial I have been making certain to pick up brochures, handouts, tokens, and other small things wherever the Hayfoot and have traveled. They will never be worth millions, but they are tomorrow’s pieces of Americana. The Hayfoot even bought me a box just for this kind of thing.

I assumed that the United War Work Campaign pin was from one of the Alphabet Soup agencies during the New Deal/WW2 Era, with the 7 representing a union chapter. The blue star seemed further evidence of WW2 provenance. As it turns out, this UWWC pin was from the First World War. The 7 represents that number of organizations who pooled their resources for the war effort. Click here for some cool ass pics. I am not sure who would have worn such a pin. If it was for workers on an assembly line or something along those lines I don’t know.

That brings us to the third item.

I was hoping this was Civil War-related–and maybe it is–but no matter how much I search I cannot find anything about it. It is a little hard to make out, but it seems to say it is the 56th annual meeting of the Jr. O.U.M.M.  What that is I have no idea. If anyone does, I would love to know more.

So, into the box these will go, to be forgotten until pulled out on a winter’s night for an hour or so of perusing over a cup of coffee.

Remember, you are making history right now. Make sure to save a little part of it.