I’m sorry about the lack of posts this week. I have been sifting through the paperwork I gathered at the LOC last week. I have also been getting ready for the spring semester at the college where I work, which begins tomorrow. 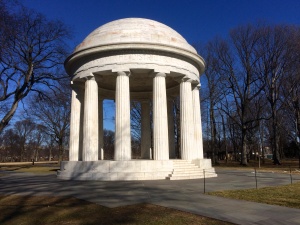 Last week when I was in DC I spent a few hours on the National Mall. One of my favorite memorials is one that no one ever visits, the D.C. War Memorial. Granted there is not a whole lot to see there, but it would be nice if it got a bit more foot traffic. When the monument was dedicated on Armistice Day 1931 President Hoover gave the speech and John Philip Sousa came out of retirement to conduct the U.S. Marine Band. The first time I saw the memorial was in July 2005 when I was in D.C. with a friend, and it had fallen into a state of disrepair. It was refurbished in 2011 and looks much better. Still, as you can tell, no one stops to take in its subtle details. Why the monument is so seldom visited would be a great Interpretive opportunity. These are the types of stories I hope get told during the Great War Centennial that will begin this summer. I for one will be working it in at Governors Island.