Here is an interesting little piece that fell into my hands yesterday. It is a pullout from the New York Herald Tribune printed for the 1956 presidential election. The pullout is neutral but I would imagine the Herald Tribune itself was for Eisenhower. It was Ike’s favorite newspaper. 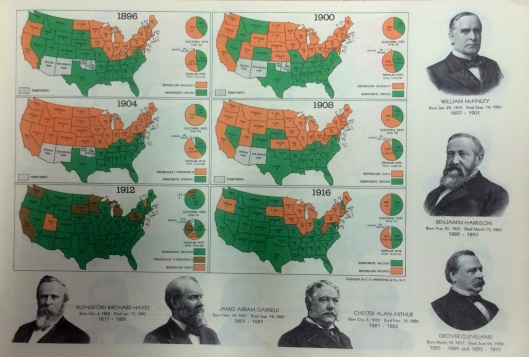 The maps break down each election quite handsomely. Now that we have that thing called the internet we pull up information at the snap of our fingers. It is easy to forget today how difficult it once was to find news and information. Even twenty years ago this was true.

The states are color coded green and orange. Today we say red state/blue state as shorthand for so many things. I wouldn’t belabor the point, but it is worth noting that these designations only entered our vocabulary in recent years.

Note how Theodore Roosevelt’s 1904 victory broke down along regional lines. Also, by 1912 Oklahoma, New Mexico, and Arizona have achieved statehood. The forty-eight contiguous states were now all part of the Union. Geography has so much to teach. 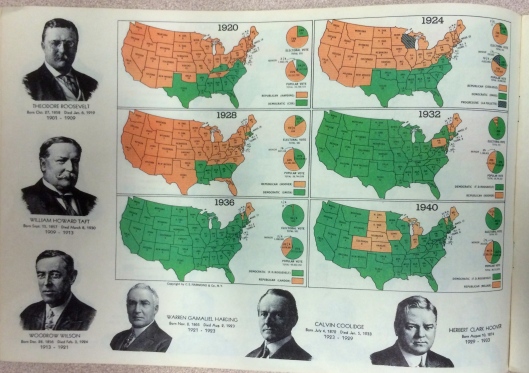 It is amazing how quickly the party realignment took place. Look at the difference between Herbert Hoover’s 1928 victory and Franklin Roosevelt’s in 1932.

“As goes Maine so goes Vermont.” That’s what Alf Landon said after he lost the 1936 landslide to FDR. Your humble writer is old enough to remember Alf Landon. Really.

You can see how in 1940 Roosevelt lost the strongly isolationist Midwest.

Theodore and Franklin Roosevelt appeared on the national ticket eight time between 1900 and 1944.

They lose a little something in the snapshots I took with my phone camera, but the maps are brilliantly stunning in their simplicity. C.S. Hammond & Co. produced them. Some of the company’s papers are now in the Library of Congress. Again, these were printed on newsprint almost sixty years ago.

On the back they even gave you a chart to keep track of the election results.