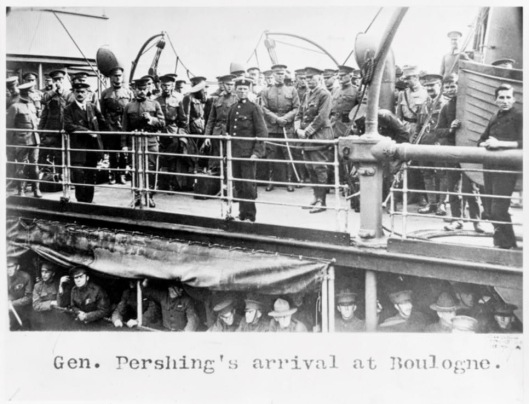 Pershing is hard to make out amidst his entourage aboard the Invicta.

Almost three full years after the First World War began the United States was now set to finally join the fight. General John Pershing arrived in France on June 13, 1917. He crossed the English Channel and arrived in Boulogne-sur-Mer near Pas-de-Calais before moving on to Paris. His last few days in England had been intense. He had lunched with King George and Queen Mary on the 11th, before moving on to the House of Commons, and then the home of U.S. Ambassador Walter Hines Page, where the general met with leaders such as David Lloyd George. Pershing’s engineers, quartermasters, and other key staff had already moved on to Paris. Building an army was no small task and Pershing was eager to put aside the public diplomacy and get down to work. He left London quietly before daybreak, took the train to the coast, boarded his ship, and was in Boulogne by 10:00 am. The stakes were high. Later that very morning a German air raid over London killed nearly 100 people and wounded five times that many. 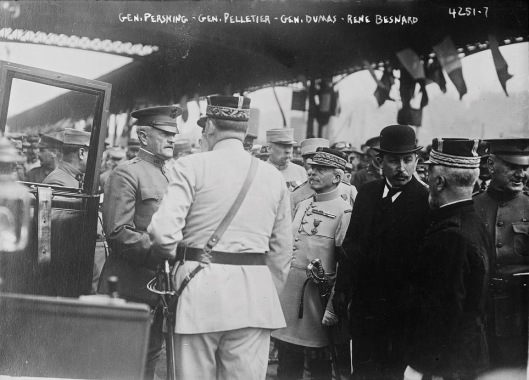 The dignitaries on hand signal the significance of Pershing’s arrival in Boulogne.

Adoring crowds met Pershing, who was soon off to Paris for the requisite meetings and other affairs with both British and French officials. Field Marshal Joseph Joffre, fresh from his own trip to the United States one month prior, was on hand with numerous others to meet Pershing in the City of Light. There would be numerous strains between the various allies in the weeks and months to come. All had different visions of what the American contribution would look like. For now all that was in the future as Paris turned out to greet America’s leading general.