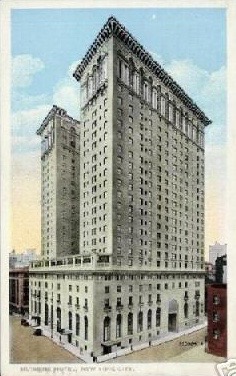 As August 1917 wound down the officers and men of what was now the 27th Division prepared to leave for Spartanburg, South Carolina. They were supposed to go several weeks earlier but bureaucratic snafus in the War Department prevented that from happening. Things were now as in place as they were going to get. Before the division left, the people of New York prepared a three-day fête to see the men off. On Tuesday 28 August about 500 people showed up at the Biltmore Hotel to honor Major General John F. O’Ryan, the division’s commander. There seemed to be a conscious attempt to play up the Irish aspect of the evening. Mayor Mitchel was one of the organizers and T.P. O’Connor gave the keynote. Broadway turned silent film star William Courtleigh was the master of ceremonies. The evening was quite reserved and understated; organizers were trying to Hooverize–conserve in the name of the war effort–as much as they could.

It had been a hectic few days. Later the past week New York State’s attorney general had placed O’Ryan on the New York National Guard inactive list. This was because President Wilson and the Senate had appointed O’Ryan, and most all militia officers, in the National Army a few weeks back. That had put O’Ryan’s militia status somewhat in question. O’Ryan had spent much of this time visiting his regiments out in the field. Many of them were camped out in municipal parks. Brooklyn’s Twenty-Third Infantry Regiment for instance was training in Van Cortlandt Park in the Bronx. The time to move on was near and people were gathering. All of O’Ryan’s staff were on hand at the Biltmore dinner as well. The dinner was just the lead-up to what was to come over the following two days.