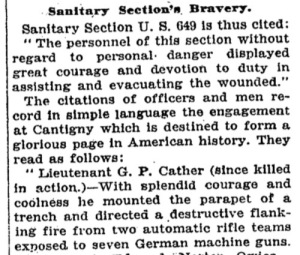 We wrapped up the second of our two sections yesterday for the Library of America World War One module with two English classes. I will have more on that in future posts but for now wanted to share a small part of it. For the module students read excerpts from The Library of America anthology “World War I and America.” One of the readings was itself an excerpt from “Roll Call on the Prairies,” a piece that Willa Cather wrote for The Red Cross Magazine in July 1919. In my prep work for the session I learned that the novelist had a cousin who was killed in the Great War. This turned out to be one Lieutenant Grosvenor Phillips (G.P.) Cather. I did a bit more digging and it turns out that Lieutenant Cather was killed at the Battle of Cantigny on 28 May 1918.

I intend to do a deeper dive on G.P. Cather next spring on the 100th anniversary of his death. With the classes still fresh on my mind however, I wanted to share a few details about the young officer. Cather not only served in the Great War but fought in the First Infantry Division. Even wilder it turns out that Lieutenant Cather served not only in the Big Red One, but in the 26th Regiment under the command of Major Theodore (Ted) Roosevelt Jr. Major Roosevelt was gassed at Cantigny and the following month received the Silver Star for his actions there. Cather was not so fortunate and was one scores of Americans killed on the 28th of May 1918. He was posthumously award a Silver Star and Distinguished Service Cross. Lieutenant Cather was buried in France but  re-interred in Nebraska in the early 1920s. His cousin never forgot him. Willa Cather used her G.P. as the inspiration for her novel One of Hours, for which she won the Pulitzer Prize in 1923. Again, I will have more on this next spring but for now wanted to share this brief vignette.