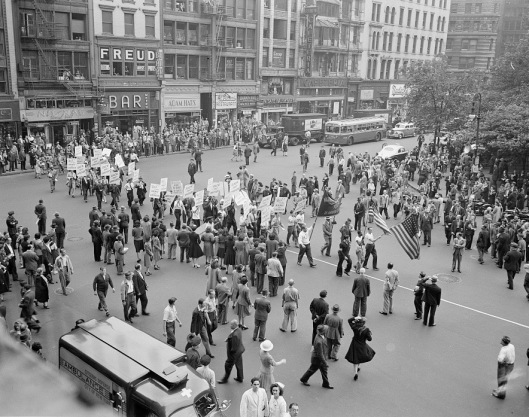 Good morning, everyone. I could not let the 75th anniversary of the Normandy Invasion go unnoticed. Anniversaries such as this are an opportunity to pause and reflect on what we have gained and stand to lose in our current troubled times. Coalitions are difficult to build and easy to destroy. We would do well to remember the lessons taught to us by Franklin Roosevelt, Dwight Eisenhower, George Marshall, Harry Truman, and the many others who helped create the world we cavalierly take for granted today.

Last night one person did mention to me the 75th anniversary of D-Day. We’ll see how many, if at all, do today. Here is a post I wrote in 2011. The major D-Day anniversaries have followed me over the course of my adult life.

There are many striking images of New York City taken on June 6, 1944. People obviously had a need to be out publicly, anxious as they were for news from England and France. D-Day was a lonely time for Eisenhower himself, who by that time had done all he could and thus spent his hours chain-smoking and waiting for news at his headquarters in England. Here in the States, ball games were cancelled, shops closed, and things in general came to a halt as the fate of the war hung in the balance.

(image/photographed by Howard Hollem, Edward Meyer or MacLaugharie for the Office of War Information; Library of Congress)