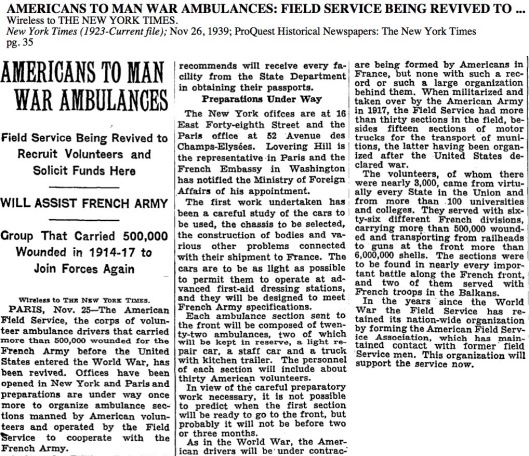 Yesterday I was working on a small project that hopefully will come to pass in 2017. I don’t want to go too much into the details just yet; we’ll see how things go. I did come across something I thought worth sharing: this 26 November 1939 New York Times article about the next generation of American Field Service ambulance drivers heading off for Europe. This is the cohort that would serve in the Second World War. Oddly enough, their departure fell between Franksgiving on the 23rd and Thanksgiving on the 30th. The AFS story began in 1914 when idealistic young men, usually from America’s finest universities, left their campuses for the field hospitals of Flanders, Italy and elsewhere. We had a reconstructed WW1 AFS ambulance at Governors Island on Doughboy Day this past September which drew large crowds.

When war came to Europe again in September 1939, the AFS picked up where it left off after the Armistice and Treaty of Versailles twenty years earlier. It’s interesting to note the initial centers were Paris and New York City, as they were during the First World War. November 1939 was of course six months prior to the German occupation of Paris. I imagine that by summer 1940 the Parisian offices had relocated either to Vichy France or to another European city.

Because Franksgiving itself lasted three years I figure I get today and 2018 to share this post I wrote last year on Black Friday. Enjoy your weekend, everyone.

I hope everyone got enough to eat yesterday and refrained from waking up at 4:00 this morning for Black Friday. In a sense we have Franklin Roosevelt to thank/blame for turning the day after Thanksgiving into the retail orgy it has become. Since 1863, when Lincoln asked Americans to pause and give thanks for what they had during the difficult days of the Civil War, the country always marked Thanksgiving on the last Thursday in November. Decades later, in the waning days of the Depression, leaders of the Retail Dry Goods Association convinced President Roosevelt that because Thanksgiving fell on November 30 the late date would dent their Christmas sales. And so in August of that year FDR announced that Thanksgiving would fall a week earlier, on the fourth Thursday of the month, November 23. 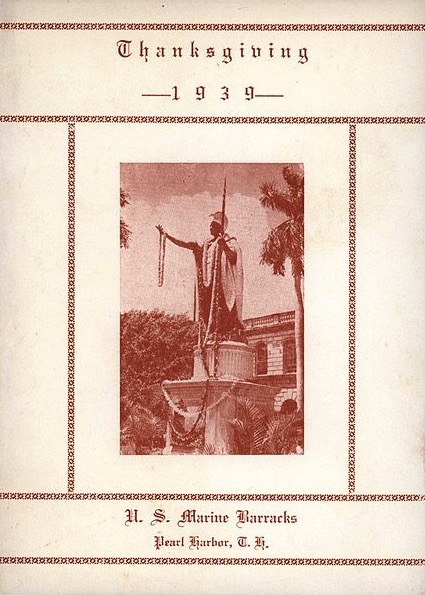 The cover of the menu for the Marines Thanksgiving dinner, Pearl Harbor 1939. It is unclear if the Marines marked the earlier or later date, though an educated guess would say the earlier being that the directive had come from their commander-in-chief, President Roosevelt. Just over two years later the Japanese would attack the base, launching the United States into World War II.

Thanksgiving at this time was not yet a legal holiday; state governors had the option of setting the date themselves, though by tradition they had usually rubber-stamped what presidents since Lincoln had done. That was not to be in 1939. Roughly half the state governors chose November 23, with the other half opting for the traditional. So the United State had two Thanksgiving that year, and again in 1940 and 1941 as well. Tellingly the most resistance came from New England, especially Massachusetts, where the holiday had originated in 1621. Bay Staters did not see the humor in messing with the traditional date. Roosevelt’s detractors called the president’s proclamation “Franksgiving.” The financial benefits of the earlier date were ambiguous, perhaps because of the confusion with the mulitple. The experiment came to an end three years later; facing so much backlash and resistance, FDR called off the dual celebrations. In a larger sense he–and the retailers–got their way however. Thanksgiving was permanently and legally moved to the fourth Thursday of the November, adding a few extra days to the holiday shopping season.

Roosevelt knew how to use these men for his own purposes; he resembled Hawthorne’s picture of Andrew Jackson as one who who compelled every man who came within his reach to be his tool, and the more cunning the man, the sharper the tool.

I had a meeting in the city today, after which I went to a small movie theater in Greenwich Village to see the film Behind Bayonets and Barbed Wire. It is a documentary about the Bataan Death March. What made it more immediate was that we interviewed one of the subjects this past summer at Governors Island. The film is a joint U.S./Chinese production and so focused in part on the often overlooked Sino experience during the Second World War. One can imagine that with China playing an ever larger role on the economic and political stage that this will be a more common thing. The interviews with the survivors are always riveting without lapsing into bathos, and the documentary even ends on something of an uplifting note.

The film’s major drawback was the unfortunate decision to re-enact scene from the Bataan march and the later POW experiences at the Mukden Prison Camp. I cannot express how distracting the re-creations are, or the extent to which they cheapen the film. The re-enctments may lessen the movie but they can’t take away from the events themselves; the Bataan/Mukden story is too powerful for that. With all that said, the filmmakers did the historical record a great service by interviewing these people before it was too late. If you have a chance, try to  see the film if you can. I’m sure it will be available via streaming in the near future. 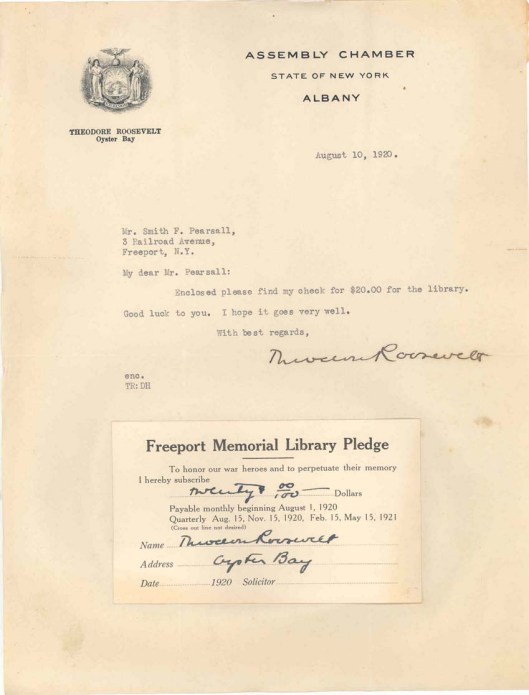 I know someone who is researching their local library out on Long Island who in the process came across this interesting Roosevelt document. It is a $20 pledge from Ted Roosevelt toward the creation of the Freeport Long Island Memorial Library. The library opened in 1924 and is one of the few libraries that served–and serves–as a Great War memorial. Note that the letterhead is addressed Albany, where Roosevelt was serving in the New York State Assembly when he signed this in August 1920. His signature is quite similar to his father’s. One can only speculate to what extend that might have been intentional.

It was a busy time for the thirty-three year old Great War veteran. Ted had returned from France in March 1919 and immediately helped get the nascent American Legion off the ground. That year he also began his political career, winning the assembly chair from Nassau County that fall. In 1920 he was running for re-election and spent much of the summer criss-crossing the county. Ted and wife Eleanor were not just thinking of his re-election. The Brooklyn Daily Eagle notes in its October 2, 1920 edition that Eleanor Butler Alexander-Roosevelt turned out in Freeport for the Nassau launch of the Warren G. Harding-Calvin Coolidge presidential campaign.

One day when I was attending graduate school I mentioned in class that the authors of both the books we had read that week had both emphasized that they had been college students in 1968, that year in our nation’s history when the world seemed to be falling apart. To my astonishment the professor asked “What happened in 1968?”

That little vignette came back to me earlier today when I came across the documentary short that Chuck Braverman produced for the The Smothers Brothers Comedy Hour in early 1969. I had not seen this in many years. One can draw many lessons from Braverman’s minor classic. The one I will draw on here, after our divisive election season, is that the world has always been troubled but that, whatever one believes or wherever one falls on the spectrum, the world is not grinding to a halt. From Harding in 1920 calling for a return to normalcy after the Great War, the influenza epidemic and the riots of 1919; to FDR’s first inaugural in 1933; to JFK’s January 1961 message about being disciplined by a hard and bitter peace, our nation has gone through anxieties of many varieties before today’s times. Breath deep and take in Chuck Braverman’s brief history lesson.

Here is a little something to get your week off to a good start, especially with it now getting dark so early. The other day I received a group email from the folks at the World War One Centennial Commission with a brief preview of a film coming out this Friday, Veterans Day. The film was produced by the WW!CC in cooperation with C-SPAN 3. The film premiers at 10:00 am and airs again at 10:00 pm Eastern Time that night before showing a few times over the weekend.

I’m sorry about the lack of posts in recent weeks but with the semester in full swing it has been a grinding period at work. I’ll have more posts in the coming days and weeks. Last Saturday I was in Oyster Bay for the Theodore Roosevelt Association conference. It was great seeing some folks again and meeting new people as well. The talks were great. After lunch I took a cab to Sagamore Hill with a couple from Texas who I had met that very morning. The three of us had split an earlier cab getting from the Glen Cove train station to the conference hall. I had never been to Sagamore before. It was rewarding to share the experience with others who have a strong knowledge of the topic. Because there is so much to see–I am fully aware that I missed a great deal in just our 2-3 hour jaunt–I’ll probably go back during a warmer weekend this winter. 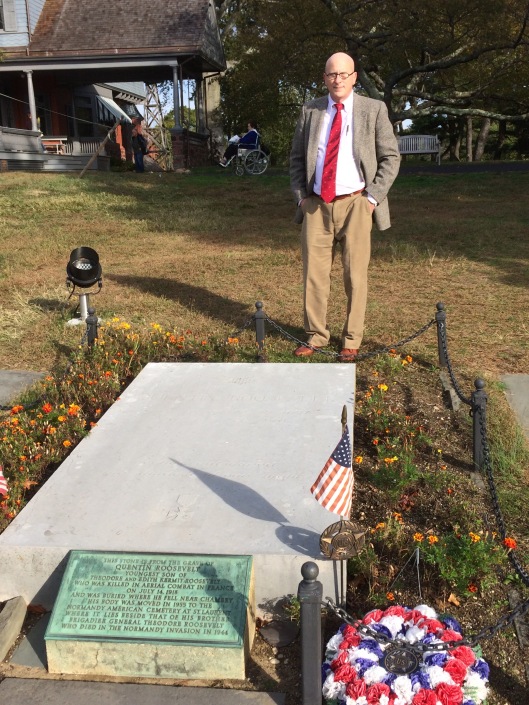 Yesterday I finished Hissing Cousins: The Lifelong Rivalry of Eleanor Roosevelt and Alice Roosevelt Longworth. I don’t know untold the story was, but the authors did a fine job of conveying the complicated relationship between the two women who between them lived in the White House for twenty years. I saw the co-authors (and married couple) speak at the Roosevelt House on East 65th Street a few years ago and spoke briefly to one of them. One thing the Ken Burns’s Roosevelt documentary did well was show how the two sides of the family interconnect in all its human complexity. The authors of this dual Alice and Eleanor biography have done the same.

This weekend I began James MacGregor Burns’s  Roosevelt: The Lion and the Fox. The book came out a full sixty years ago, in 1956,and straddles a line between history and current events. It is volume one of an eventual two volume work and ends in 1940 on the cusp of the Second World War. Volume two came out out in 1970. I’m reading it with the awareness and caveat that James Burns was an open admirer of FDR. As a cog in the political/academic nexus of the 1940s-60s though, I suppose this was inevitable. My impression however is that Burns did not lapse into the role of court historian the way Arthur Schlesinger Jr. did. The Lion and the Fox is a political biography and I am looking forward to hearing what Burns has to say about young Roosevelt as assistant navy secretary during WW1.