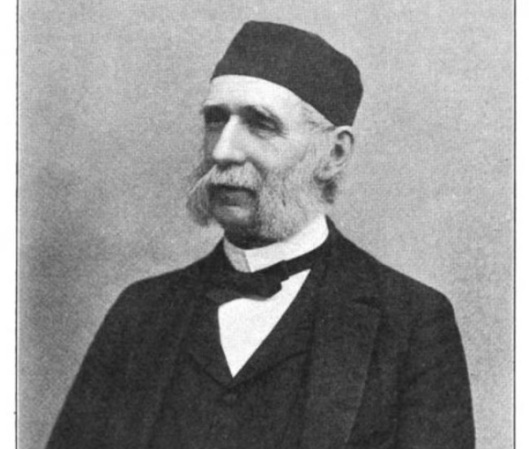 I was home working today. I was writing about the creation of the New York State Republican Party, which formed in Saratoga Springs in August 1854 as a response to the Kansas-Nebraska Act. Young Chester Arthur was one of the delegates. In September 1904 during the heat of the presidential race between Theodore Roosevelt and Alton B. Parker–two New Yorkers–the Republicans held a 50th reunion in Saratoga Springs. TR’s running mate, Charles W. Fairbanks, was one of the speakers in Saratoga at that 50th celebration. Members of John C. Frémont’s family were on hand as well, including his son Major Francis P. Fremont who five years later would be court-martialed for a third time in the waning months of the Roosevelt administration.

What caught my eye when reading the 50th anniversary Proceedings was this photograph of the aging Frederick W. Seward. Frederick was of course the son of William H. Seward. He graduated from Union College a year after Chester Arthur and he too would be at the Saratoga Convention in August 1854. Frederick later worked as Assistant Secretary of State for his father in the Lincoln and Johnson Administrations and served in the same capacity for William Evarts for a time during the Hayes’s years, eventually succeeded by John Hay. Seward thwarted the Booth conspirator who tried to assassinate his father and a half a century later was still around to tell the tale. He helped run the Hudson-Fulton Celebration in 1909, a forgotten event today but which among other things involved Wilbur Wright flying from Governors Island, around the Statue of Liberty, and back.Even more incredibly an article in the Smithsonian Air & Space Magazine informs us that passengers aboard the Lusitania witnessed that feat.

Seward died in April 1915, fifty years after the Civil War’s end and two years prior to American involvement in the First World War.

I hope everyone had a good Easter Sunday. I was walking back from Prospect Park earlier when I came upon this sign in a front yard. I naturally stopped to read it when I noticed that sure enough they had a cannon in their front yard. Note how professional the wayward marker is. In terms of quality and appearance, the battle map looks like something one sees on the Civil War Trust website. My favorite part is the wooden pail, presumably there to imitate a sponge bucket. Color me impressed.

What was now several decades ago my brother and I had the chance to briefly visit Poland. It was always my dream to take our father there before he died, but alas that never came to be due to ill health in his later years.

Earlier this month I read Louis Auchincloss’s memoir, A Voice from Old New York: A Memoir of My Youth. I have always found it oddly comforting that cities like New York, Boston and Philadelphia still have remnants of the old families that ran things for, really, centuries. When one goes to a place like the University or Union League Club one can’t help but notice the names from these families of the sons who fought in our nation’s earlier wars. When I read the excerpt about his father and the training base in Kentucky I naturally had to do a small something about it.

It’s early Sunday morning. I am sitting here for a spell before going in to work to teach a class. The week is going to be a bit of a push but next weekend I’ll be getting a longer weekend taking off Good Friday. If our early spring continues I may go to the New York Botanical Garden. I wrote about 2000 words this week on the Civil War New York book. The goal is to finish the draft in mid-summer. I spent the day with friends yesterday and then came home last night and wrote about 220 words. It’s amazing how when you just sit down and begin the process takes over. I took the above photo around 10:00 last night as I was wrapping up.

I have written about this a bit in the past but today is the official release date of The Wonder of it All, the book published by the Yosemite Conservancy for which I contributed a story. My chapter tells the tale of the first time I took the Hayfoot to Governors Island. One of the guidelines was that the stories could not give names. Here, though, I can point out that the guide we had was the one and only Sami Steigmann. Sami was later the person who talked me into transferring as a volunteer to Governors Island.

Don’t forget that 2016 marks the 100th anniversary of the National Park Service. It was so much fun to be part of a project marking the NPS anniversary. Though the shift of emphasis is different, I approached Wonder in the spirit of Oh, Ranger!, which was itself influenced by a book written by Horace Albright in the 1920s. It is getting warmer by the day. Wherever you are, make the Park Service part of your spring.

Yesterday I mentioned the WW1 Centennial Committee for NYC’s social media. I have done, I think, three of these posts now and linked the first two to the Strawfoot FB page. What I intend to do now is embed my posts here on the blog itself. 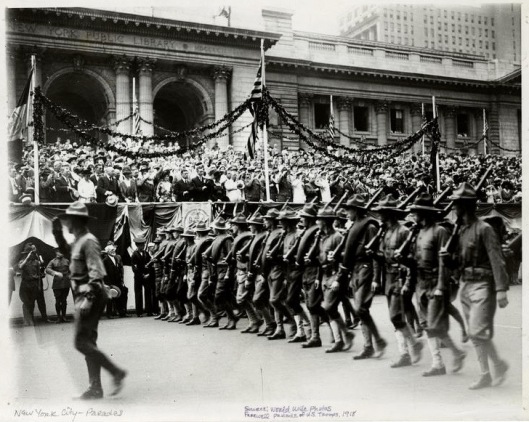 I noted with pleasure earlier this past week that the number of likes on the World War One Centennial Committee for New York City has topped and is holding steady at over 100 likes. That’s pretty good considering that the group is just getting underway. The NYC Committee is actually a sub-committee of the WW1 Centennial Commission and is the only subsidiary of the WW1CC dedicated to a municipality. This is a good thing because Greater New York, in which I am including the ports of Jersey City and that area, played such an outsized role in the war effort. I am not talking just after April 1917 either; New Yorker’s commitment began in that late summer of 1914 and continued through the Armistice and beyond. I know from sitting in on Committee meetings that the group has many exciting things planned for the next several years. This is not the reason I am writing this post, but fyi yours truly has committed to writing a social media post every 7-10 days. I think it manageable; there are so many stories to tell. In case one has never seen it here is the link to the NYC Centennial Committee’s Facebook page. Also, the website itself is scheduled to go live in a few weeks. When it does I will have more. 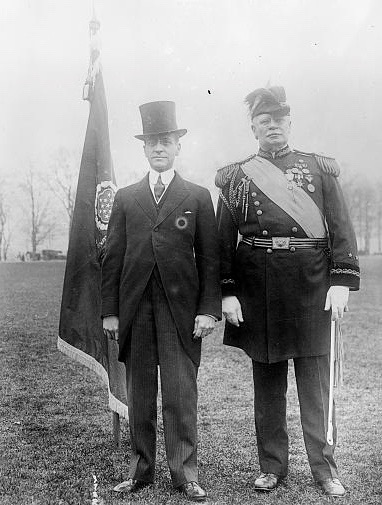 The other day I posted about Major General Hugh Scott’s month as Woodrow Wilson’s interim Secretary of War. One hundred years ago today Newton Baker was sworn in as the full-time secretary. Baker was an excellent choice and he served President Wilson well for the next five years. I uploaded this to the Strawfoot Facebook page this morning, but over at Roads to the Great War they uploaded my article about Secretary Baker. I have always found it odd that Baker is not better known today than he is. I think it may have to do with his break with Franklin Delano Roosevelt in the 1930s over the New Deal. The Democrats seem to have written Baker off. Also, Baker died in 1937 when Europe was getting ready for Round Two. By this time the world was focused on the rise of Hitler, Mussolini’s taking of Ethiopia, and the Japanese threat in the Pacific. By 1945 the WW1 generation must have seemed entirely anachronistic to most Americans.

The Baker piece was the second of a two part series. If you didn’t see it, here is the link to the piece about the February 1916 resignation of Baker’s predecessor, Lindley M. Garrison.

Last week the Pentagon announced that it has appointed former Google CEO Eric Schmidt to lead a new Defense Innovation Advisory Board. What the Defense Department hopes Schmidt can do is update its aging information technology infrastructure, which like most of our government bureaucracies’ it infrastructure is woefully inadequate. Hopefully Schmidt and his colleagues can do something about that. Not least are the hacking threats to which the outdated systems are suseptible. Esquire’s Charles Pierce notes that this is not the first time the American military has turned to C-level talent to fix its problems. During the First World War Bernard Baruch ran the War Industries Board to bring the woefully unprepared American Expeditionary Force up to speed for its task at hand.