In doing the research for the posts this past week on the USS New York and the fleet review of December 1918 I came across sobering articles about a riot involving African-American troops from the Bush Terminal in late 1918. Really it was just one in a number of racial and other disturbances throughout the city, indeed throughout the country, during and immediately after the war. This one involved some men denied service at a saloon on DeKalb Avenue and quickly escalated into a scene with 2000 lookers-on and 150 military and civilian police. Shots were fired but no one was killed or injured. Incidents like these are part of why the Great War plays a smaller role in the imaginations of most Americans than other of our conflicts. Expectations so high in America and around the world in those heady days after the Armistice soon became mired in complexity and dashed hopes.

Brooklyn’s Bush Terminal was integral to the war effort.

Troops began coming home in that final week of 1918, a process that would continue in February and March of 1919. The end of our own year right now has me reflective on what happened in this heady months just after the Armistice. Temperance and suffragism were two goals of the Progressive Movement that came to fruition after the fighting stopped. What eventually came to be called the New Negro Movement was also coalescing. Scholars like W.E.B. DuBois believed that African-American soldiers returning from the Great War would comprise a vanguard that would end Jim Crow. That came partially true in cultural movements such as the Harlem Renaissance. In the meantime there were incidents like the bloody Red Summer of 1919. The relatively minor incident at a bar in Brooklyn was just a precursor. These are all topics to be explored as the Great War Centennial continues.

Governor Charles Seymour Whitman spoke at the 13th Armory in Brooklyn on 27 December 1918. He had just lost a narrow race to challenger Al Smith and had asked for a recount, which was ongoing at the time.

As I said yesterday I intend to do deeper dives into the various reviews that took place in late 1918/early 1919 when the time comes. In the meantime I wanted to note the 98th anniversary of Governor Charles Seymour Whitman’s 1918 visit to the Brooklyn 13th Armory. I knew that there were parades and such in the aftermath of the Armistice, but it did not occur to me until these last few days just how ubiquitous they were. I suppose that in those heady days after the Kaiser’s abdication and Germany’s surrender that people felt that war really might have been rendered obsolete. Wilson was certainly optimistic while in Paris.

These ads ran all week in the Brooklyn Daily Eagle announcing the date change.

Governor Whitman of New York had lost to Al Smith in the November 5 gubernatorial race. Smith was the Democratic candidate and Seymour the incumbent Republican and Prohibition candidate. It’s almost a cartoon of late nineteenth and early twentieth century New York politics: Smith was a Tammany man and Whitman a Union League Clubber. The old and new were mixing in this period. On Memorial Day 1918 Whitman was in Brooklyn’s Grand Army Plaza for the GAR parade; a month after he was at the state GAR encampment in Ithaca. Still, his Prohibitionism and Smith’s Catholicism show hints of what was coming in the 1920s.

In doing my research for the USS New York article I came across a trove of material relating to the dreadnoughts, the Brooklyn Navy Yard, and the political/social milieu in which these ships were built and then served in the Great War. I intend to write more about all this when the 100th anniversary of the review comes around two short years from today, but in the meantime I wanted to share this stunning image of the USS Arizona taken in the Hudson River on December 26, 1918. There had been so many parades and ceremonies in the 5-6 weeks after the Armistice, but the NYC Naval Review of 1918 stood out. There were nearly a dozen dreadnoughts and scores of accompanying others ships in New York Harbor. There was a dress parade as well.

Woodrow Wilson was not in attendance because by this time he was already in Paris. These same ships of the review had escorted him there just two weeks earlier. His Secretary of the Navy Josephus Daniels watched the review from the presidential yacht, the Mayflower. Daniels’s assistant, Franklin D. Roosevelt, was there too, watching from the Aztec. With his love of the Navy there was no way FDR would have missed something like this. The above photo is so great because Assistant Naval Secretary Franklin Roosevelt had attended the laying of the Arizona’s keel just a few years earlier. Obviously no one could have known at the time, but this ship went down at Pearl Harbor on another December day decades after this photo was taken. 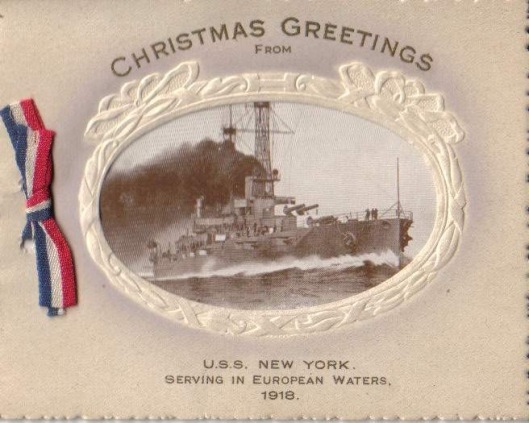 It is a rainy Christmas Eve morning here in Brooklyn. Listening to the rain is quite relaxing. I just wrapped up and emailed off a small project that hopefully will see the light of day in the next few weeks. I don’t want to give too much away for the moment but I will say here that it is about the USS New York. Yesterday I came across these incredible images at the Library of Congress Prints and Images website and thought I would share them today. They were taken aboard the New York in the Brooklyn Navy Yard one hundred years ago, on Christmas Day 1916.

I am submitting them with little comment but will note that the funds for the gifts and toys were provided by the crew. On his own dime the ship photographer printed 1917 calendars with images of Captain Hughes and others, which he then sold for 30 cents apiece. The ship tailor raffled off a custom made suit, and so forth. For its endeavor, which it had begun the year before after returning from the blockade of Veracruz, the New York became known as the Christmas Ship. For Christmas 1916 they raised $1000–over $22,000 in today’s currency–and provided toys and Christmas dinner to 500 needy New York children. One year after these images were taken the United States was in the Great War and the dreadnought was attached to Britain’s Grand Fleet, keeping the Germans in check in the North Sea.

A few things: notice the Williamsburg Bridge in the background of some of the images; also note the stamps in some of the images, which I intentionally did not crop out. I could not tell if these were revenue stamps, and if so why they would be necessary. If anyone knows, I’d be interested to learn. 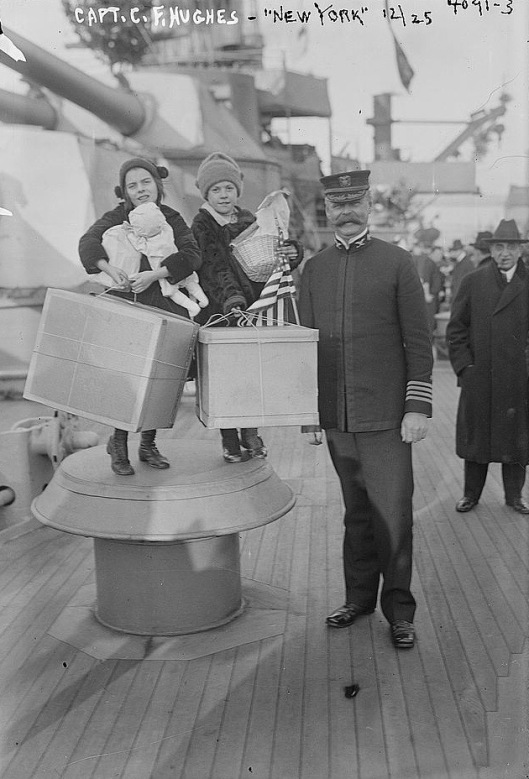 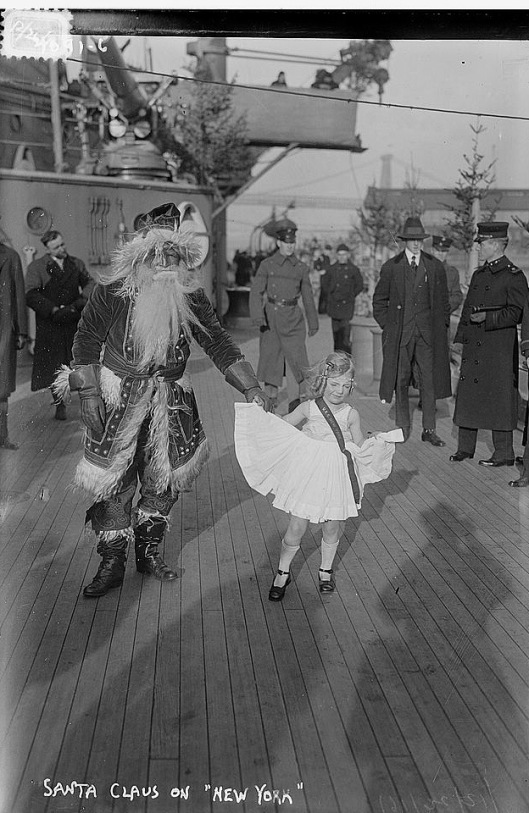 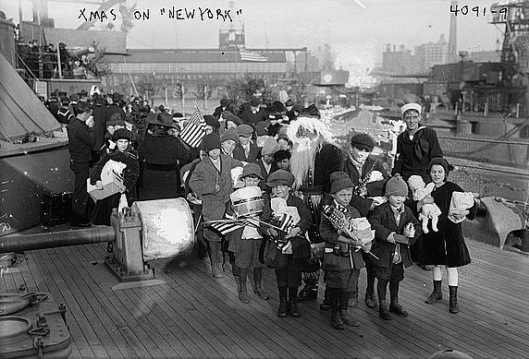 With the election over and the year winding down Naval Secretary Josephus Daniels issued his annual report in December 1916.

Woodrow Wilson had won re-election by the time his Secretary of the Navy, Josephus Daniels, submitted his annual report on the state of the Navy in December 1916. In his communiqué Daniels singled out the Brooklyn Navy Yard for distinction. It was a busy era at the facility on the East River across from Manhattan; everyone knew that ships would be increasingly important with the coming completion of the Panama Canal. Construction of the USS New York and Florida had begun even before the outbreak of the Great War, and the Arizona came soon after.

During the hot summer of 1916 Daniels pushed for a greater expansion of the Navy, advocating for 100+ new ships. This was good news to Daniels’s assistant, the rising politico, Preparedness advocate, and avid amateur naval historian Franklin Delano Roosevelt. FDR had personally attended the laying of the keel for the USS Arizona in March 1914, the same month Wilson entered the White House. Now, 2 1/2 years later, Secretary Daniels wrote that the Brooklyn Navy Yard had “demonstrated an increase of efficiency in new construction” and added that “the actual cost” of the Arizona in real dollars was much lower when compared with that of those even slightly older ships. The cost per ton of the Florida had been $286, of the New York $233, and of the Arizona $211.

I attended a Pearl Harbor 75th anniversary event on Monday. The Cadman Park Conservancy organized the event, which was held at Brooklyn Borough Hall. There were eighteen WW2 veterans in attendance, one of whom was a Pearl Harbor survivor. Having the event in Brooklyn was poignant, being that ships such as the Arizona were built just a few miles away at the Navy Yard. I wrote five years ago about the Pearl Harbor anniversary and so won’t do so again here. I do want to share a few images from the day. There is only one 75th anniversary of the attack on Pearl Harbor. 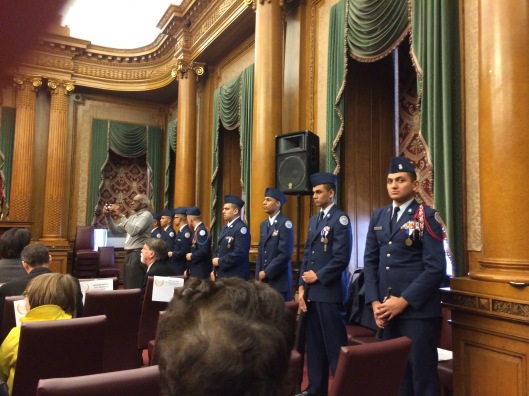 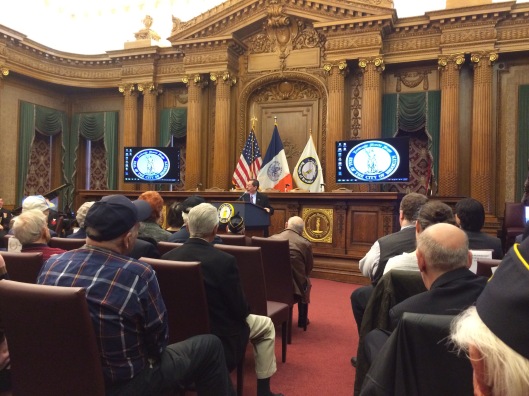 Brooklyn Borough Historian Ron Schweiger spoke about life in the borough as it was in 1941.

The commemoration had several fine speakers besides Ron. Appropriately, the veterans themselves were always the focus.

After the speeches, wreath laying, songs, and color presentations, film crews moved in to interview the men.