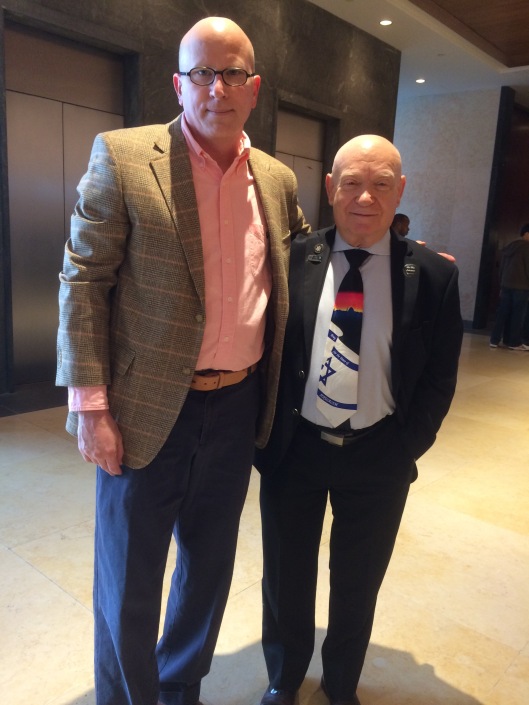 This past Sunday morning I was at the Museum of Jewish Heritage on the Battery to see my friend Sami Steigmann participate in a ceremony to remember the Holocaust and other crimes committed in Europe in the twentieth century. Sami Steigmann was born in 1939 in Bukovina, one of those regions whose nation status changed hands numerous times in that span during and after the World Wars. The other day I wrote about the 135th anniversary of Franklin Delano Roosevelt. That may seem like ancient history, but it is incredibly humbling to meet people like Sami Steigmann, whose lives were changed through the decisions made by the leaders of the twentieth century. Sami and his parents were imprsoned in a concentration camp, where as a toddler he was the victim of medical experiments. Just typing these words is difficult. 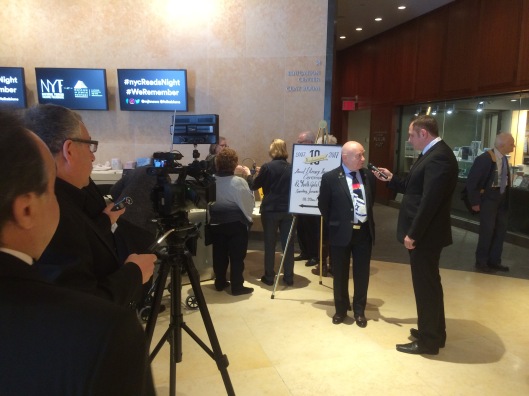 We have known Mr. Steigmann for eight years now. I even wrote a book chapter about it that was published last year during the 100th anniversary of the founding of the National Park Service. I am glad to see that Sami is becoming an increasingly prominent national figure. Even while we are still early in the new year, his 2017 calendar is already filling up with speaking engagements. And why not? Still a relatively young man in his mid-seventies, he is uniquely positioned to tell a personal narrative of the mid twentieth century in a way that few people today can. Sunday’s event had just the right balance of seriousness and levity. There was even a young all-male song and dance troupe of boys strongly reminiscent of what one might have seen at a borscht belt camp ground circa 1955, and that’s a compliment. When it was all over I didn’t stay long. The crowd to meet Sami was so deep that I said a quick goodbye and headed out the door into the January light. 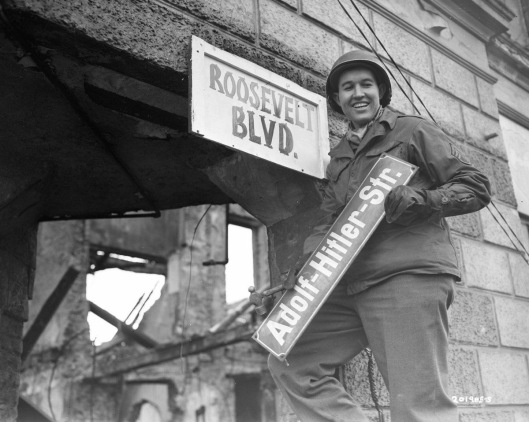 World War II in Europe was reaching its climax in late winter 1945.

This past summer when I was at Hyde Park I had a conversation with one of the rangers in which we discussed that 2017 was the 135th anniversary of Franklin Delano Roosevelt’s birth. He was born there at Springwood on 30 January 1882. I usually visit Hyde Park every summer and have spoken to different rangers in recent years about the dwindling number of visitors who have that emotional, visceral attachment to FDR when visiting the site. It is no wonder, with so many Americans having grown up hearing the four-term president on the radio regularly throughout the Depression and Second World War. Nowadays there are still a few such on the pilgrimage, but for the most part that cohort has aged out. I find this photograph intriguing on a number of levels. The image is of Sergeant George A. Kaufman of the 9th Army and was taken in Germany on 9 March 1945. The public did not know it at the time, but Roosevelt was failing quickly by this time. He would die in Warm Springs just over a month later.

Roosevelt’s life and times spanned much of the American moment, an era that sadly might be winding down before our eyes seven decades after his passing. Roosevelt attended Harvard at the turn of the century, served as Wilson’s Assistant Navy Secretary during the Great War, governed New York State in the late 1920s and 1930s, and was in the White House the last dozen years of his life. It is easy to forget that he was only sixty-three when he died. I see on the Hyde Park/NPS website that they are having a program today at 3:00 pm in the rose garden behind the library. The Hudson Valley is cold this time of year, but it looks like the weather will cooperate. I am curious to see if there is more to come over the course of the year. 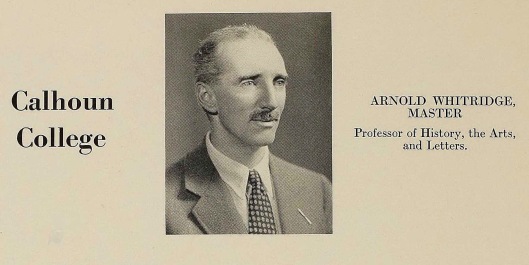 Some of you may remember just after the new year when I wrote about the funeral of Frederick W. Whitridge.. My post about his son Arnold is up and running over at Roads to the Great War. Arnold Whitrdige died twenty-eight years ago today. 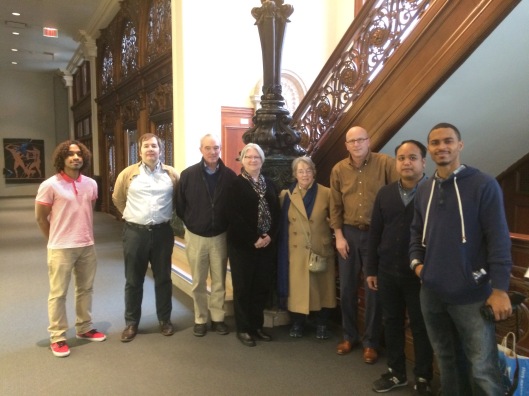 The crew posing after the session

A small group of us, some coming from Connecticut and New Jersey, were at the CUNY Graduate Center this morning for the first of our film shoots to make the WW1 documentary we are producing. We are making a 15-20 minute film in which we interview the family of a World War One doughboy and a veteran of one of our nation’s contemporary campaigns. Our subject today was Thomas Michael Tobin, an extraordinary man from Yonkers who served as a first lieutenant and was stationed at St. Nazaire for more than a year. After the war he was engaged in civic and cultural affairs for decades. He also raised five sons, all of whom went on to make their own contributions, as both soldiers and sailors in WW2 and in their professional careers. This morning we interviewed two of Lieutenant Tobin’s grandchildren on camera and spoke to a third for background. All had many insights on the man’s life and times. 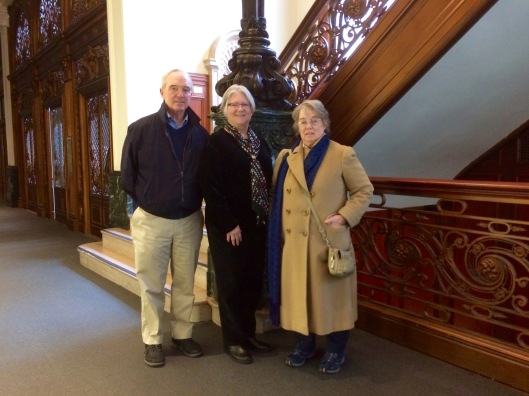 I was a little nervous going in, not knowing if we would be able to pull it off. Still, we had planned it out fairly well beforehand; it is amazing how doing the advanced prep work pays off come time. It helps also to collaborate with talented and insightful people who bring so much to what they do. I can’t tell you how much I enjoyed the session.

A teacher in Lexington, Massachusetts asked her high school students to go home and look in their attics and basements for old photographs. Here is what happened next.

It is pouring rain outside here in Brooklyn. I have spent the last hour researching in Ancestry the details of a New York doughboy. It’s the perfect research endeavor for a winter night.

I don’t want to give the biographical specifics here, but I will say that he was born in Yonkers in 1886 and went on to serve in the Quartermaster Corps during the Great War. He was in St. Nazaire when the Armistice came in November 1918. This is for a project I am working on with others in which we are making a 15-20 minute documentary to be shown this spring, summer and fall at our college and at Governors Island. Our protagonist went on to become active in New York politics, and an ally of Al Smith. He had five sons who all served in the Second World War after him. Our doughboy was apparently a formidable presence, and the family patriarch until his death in the mid-1960s. It’s really a fascinating story, and a uniquely American one.

We have our first film shoot with his grandchildren this coming Saturday. As this moves along in the coming months I will divulge more. 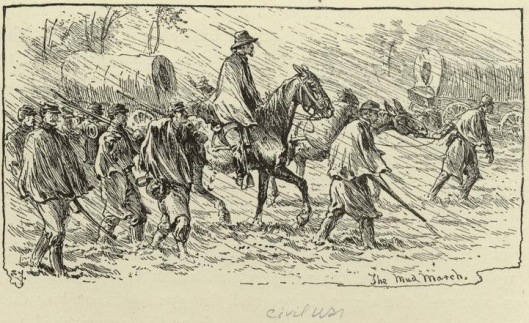 The January 1863 Mud March as depicted by Edwin Fobes

I’m listening to Debussy as I type this. It is ideal Sunday morning music. I’m having my coffee and gearing up to write a few hundred words on the Roosevelt Sr./Olmsted/Dodge manuscript. I’ll do some tweaking and editing while I listen to the AFC title game tonight. I don’t know if this is unusual but I am writing the book in chronological order; when I began I started the monograph in the 1830s and am now up to January 1863. My story ends in 1878 with Roosevelt’s death. In a small coincidence General Ambrose Burnside’s disastrous Mud March took place 154 years ago this week, right when I was discussing it yesterday. Lincoln replaced Burnside with Hooker a few days later. The disastrous Union offensive added urgency to Olmsted and Wolcott Gibbs’s  creation of the Union League Club, which though in the works since November 1862 came into being in February.

This was a productive week. I was able to generate over 4000 words. As I mentioned in a post the other day, this is the winter when I bring it all together. I have been working on this for 3 1/2 years now, with many–many–side projects mixed in there along the way as well. The target is to finish the draft by mid spring and to not be writing new material come summer. The semester begins a week from tomorrow, and while I will be doing my usual duties I will not be teaching this term. I asked out because the idea is to cut down on the distractions. Winter 2017 rolls along. 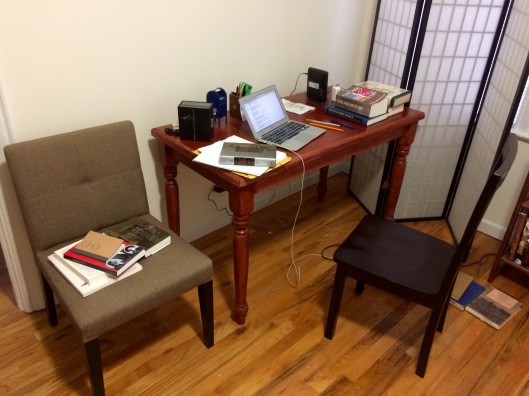 I just finished writing for the day. I cranked out 1000 words, to go with the 800 I produced yesterday. The goal is to write 5000 by Sunday evening. I am trying to take advantage of these winter days. In January and February one thinks spring will never come again. I am telling myself now that when it does I will be close to being done with the Civil War manuscript. I took the above image earlier today. The box set you see at the top left of the desk is the Complete Miles Davis at the Plugged Nickel 1965. I find I can’t listen to music with words when I write because the lyrics are a distraction from my thoughts. It is amazing how if you just sit down and start–50 words, 75 words–the process takes over. Tomorrow bright and early I’ll start fresh and begin the quest again to get 1000 words onto the screen. 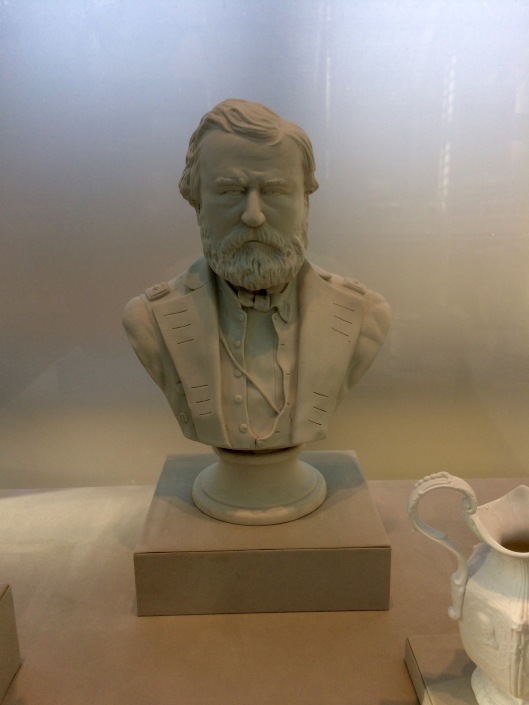 Yesterday morning I submitted a piece (to which I will link when the time comes) and then headed to the Metropolitan Museum of Art for Holiday Monday. It was not as crowded as I thought it would be. I suppose the warmer weather had people outside. I saw this bust Grant that I had not previously seen before. I intentionally left a portion of the vase in the lower right hand corner for scale. In a sense he was an opponent of the Roosevelt family because Grant ally Roscoe Conkling vehemently opposed Theodore Roosevelt Senior’s 1877 nomination to lead the Port of New York. Perhaps that partially explaining the strained relationship between their sons, Theodore Roosevelt and Frederick Dent Grant, had a strained relationship when they were on the NYC Board of Police several decades later.

It is still the intersession and I am off this week to write. The original plan was to go to Washington and work but with the inaugural taking place it seemed wiser to stay away. They say it’s going to rain today and tomorrow, which makes for good writing weather. 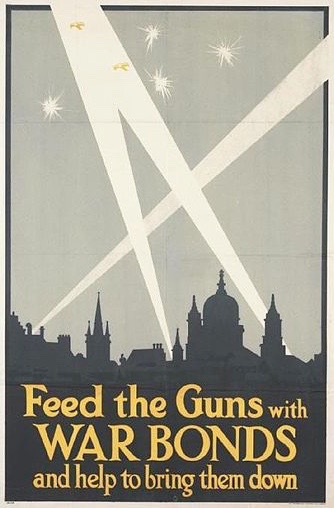 By January 1917 the Great War had been going on for 2 1/2 years. Everyone grasped the human toll after the carnage at the Marne, the Somme and Verdun. Less obvious to many was the financial cost. Estimates vary widely, which is not surprising in that most nations were hesitant to show any weakness by discussing the details. One report released the first week of January 1917 put the combined national debts of Britain, France, Russia, Germany and Austria-Hungary at $49,455,000,000. The bean counters quickly acknowledged however that even that number was low, given the extent to which internal bond drives were paying for the bullets, shells and other accoutrements of war. A separate report issued a week later put the various European powers’ war debts at $62,000,000,000, or $1,169,000,000,000. in today’s dollars.

The war of course ground on for another almost two years, and even after that there was civil war and violence in numerous regions, most obviously in Russia. War debt was a huge sticking point at the negotiations at Versailles. Even more far-ranging, the groundwork for the inflation and instability of the 1920s was already being put into place.