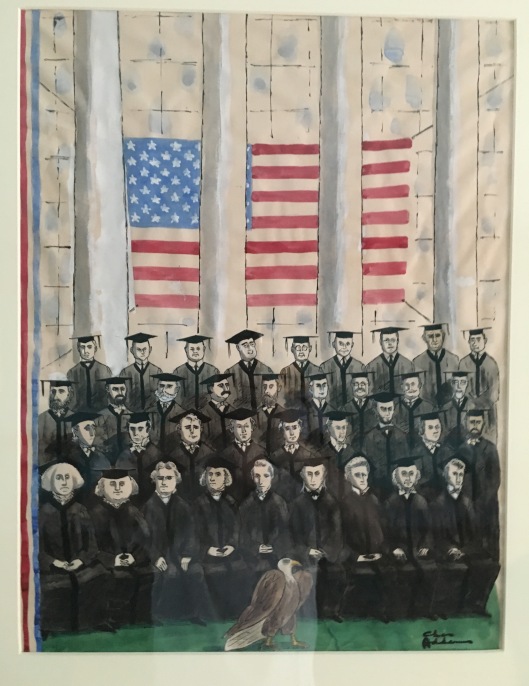 This past August, almost six months ago now, a friend and I visited the Morris-Jumel Mansion in Upper Manhattan. Among other things, on display at the time was an exhibit of the works of cartoonist Charles Addams. The artist was the originator of The Addams Family, which he based on his real life family much in the way Matt Groening later based The Simpsons on his own family. I have no doubt that Groening knew the history of Addams’s work when starting out in the late 1980s, around the time Charles Addams died of a heart attack in 1988. Addams had begun working for the New Yorker in 1935 during what we know see was a golden age of magazine writing and drawing. His contemporaries include such figures as Rea Irvin, Norman Rockwell, and J. C. Leyendecker. The item that struck me the most that day at the Morris-Jamel house was this image we see here of the presidents, which Addams created for the June 3, 1972 New Yorker cover. This would have been the summer of the McGovern vs Nixon presidential race.

The photo is not the best because the drawing was behind a pane of glass. I told my friend on that hot August day that I would post this come late January on what would have been Franklin Delano Roosevelt’s birthday. FDR was born on this day in 1882. We see him here in the top row, fourth from the left, standing tall with his characteristic big grin.

Alexander Hamilton, a grandson of the Founding Father, served in the American Civil War and was prominent in the social fabric of New York City and Hudson River Valley cultural life before and after the war.

Alexander Hamilton, grandson and namesake of the first Treasury Secretary, was born on this date in New York City in 1816. Hamilton was the younger brother of Eliza Hamilton Schuyler, which thus makes him the uncle of Louisa Lee Schuyler. Hamilton served in Spain as a diplomat on the staff of his friend Washington Irving in the late 1840s and early 1850s. When the American Civil War broke out a decade later he and his brother-in-law George Lee Schuyler served on the staff of General John E. Wool in Virginia and elsewhere. It is lost on us sometimes how close to the Revolutionary War was the Civil War; many of the figures on both sides of the Rebellion were the grandchildren of the first generation of Americans and were convinced that they were fulfilling the wishes of the Founders. It is a theme I expand upon in Incorporating New York, my book manuscript about the Civil War Era generation that came of age in the mid-1850s and lived on through the late nineteenth and early twentieth centuries.

Alexander Hamilton was a Civil War officer, prominent lawyer, and founding member & eventual president of the Knickerbocker Club. He died 130 years ago this year and is buried in the Hamilton-Schuyler plot in Sleepy Hollow Cemetery north of New York City, up the hill from the final resting place of his friend Washington Irving. I took the photo above when a friend and I visited early this past December.

This painting of President Buchanan, the Prince of Wales, and several dozen dignitaries at George Washington’s tomb in October 1860 captures a dramatic moment in diplomatic history just prior to the outbreak of the American Civil War.

Two inspirations for visiting Mount Vernon last week was a trip to the Philadelphia Museum of the American Revolution last June and a chance viewing of the above painting at the National Portrait Gallery in August. Here we see President James Buchanan and the Prince of Wales, who forty-one years after the events depicted here would become King Edward VII, visiting Washington’s tomb at Mount Vernon in October 1860. Buchanan knew the royals well, having served as Ambassador of the United States to the Court of St. James’s from 1849-53 when the prince was a very young lad. The events depicted in the painting took place in early October 1860, one month before the presidential election won by Abraham Lincoln.

The Prince of Wales was in the United States on a goodwill tour. Everyone put of a brave face but relations between the countries were strained. This all took place within living memory of the War of 1812 and even, for some very aged persons, the Revolutionary War itself, and tension in the Anglo-American relationship were evident. This was the tour during which Michael Corcoran of New York’s 69th Infantry Regiment refused to march his men before the Prince of Wales in review. The controversy in New York took place a week after this trip to Washington. The British entourage was unimpressed with the still-young nation’s capital. The unfinished crown atop the Capitol Building, stump of the unfinished Washington Monument, and shabby condition of even Mount Vernon itself–onetime home and final resting place of the colonial general and father of the country–reflected poorly on American ingenuity and even the viability of republican government itself. Given the hysteria and fever pitch surrounding the four-man presidential race then underway, once cannot really blame them for thinking such things.

I hope everyone’s 2019 is off to a good start. My gosh, I have not posted since New Year’s Day almost three full weeks ago, the longest stretch with no posts since I began the blog eight years ago. I went on holiday January 3 and have spent the time since my return preparing for the upcoming semester. My co-teacher and I have been discussing the syllabus, narrowing down the reading list, and such. It is always exciting and a little nerve-inducing getting ready for a new term. I’m fortunate to have such a good colleague.

I am here in the DC area for the weekend. Yesterday the Hayfoot and I visited George Washington’s Mount Vernon. The last time I was there was more than forty-five years ago. I wanted to visit before starting the James Thomas Flexner four-volume biography, which I intend to begin when I get back to New York City. I am supposed to give a talk related to Washington at a particular historic site in Manhattan on Presidents Day, but with the government shutdown still ongoing we will see what happens.

A cold January day is an opportune time to visit. They estimated at the information desk that they would receive 500 visitors for the day, as opposed to the 6000-8000 daily tourists they receive on a typical spring or summer day. When we arrived at the mansion itself, we walked right up as the tour was commencing. No lines. Alas photography was not permitted in the house, but my favorite item was the Bastille Key given to George Washington by the Marquise de Lafayette. I made a point to the tour guide that Lafayette gave the key to Washington with the idea that future generations might see and appreciate its significance–and that that was precisely what our little group was doing at that moment. She had clearly never thought of it like that before and lit up when I said it.

A little later in the tour we were in the outdoor kitchen when a visitor asked the guide to explain again why officials at the site refer to Mount Vernon’s enslaved community not as “slaves” but as “enslaved persons.” The reason, the guide explained quite well, is to affirm the humanity of this community and tell their stories with fuller nuance. A few in the group still weren’t getting it. As it happened this came at the end of the tour, after which we all exited into the courtyard area. We joined an informal discussion at this point in which our group was still discussing the terminology about the enslaved community. As she so often does, the Hayfoot stepped up and with clarity and compassion added a few salient points that built on what the guide had said. A few eventually “got it,” with or without necessarily agreeing with the premises being expressed. A smaller number never did get it. If they went home to ponder it, or put it out of their minds entirely right then and there, I will never know.

All in all it was a great day. There was so much to see and so little time to take it all in that we became Mount Vernon members. So come spring we’ll be there again, only this time with the great masses taking in the gardens and all else there is to see and learn at George Washington’s Mount Vernon. 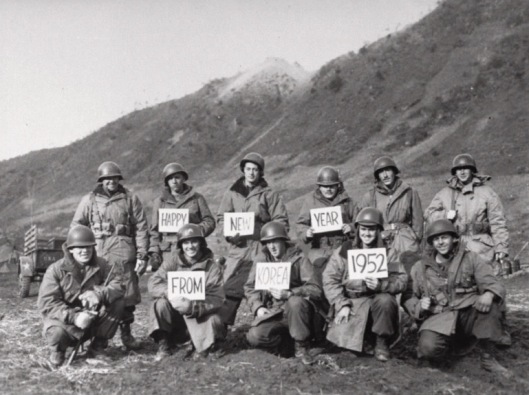