I took this picture from the third floor of the Brooklyn Public Library this morning. It got down to 37 degrees today.

Monuments and memorials are a big part of what we talk about in our Learning Places class. Unfortunately one component of that discussion is how statuary and historic structures are often vandalized. This vandalism can be political in nature, such as when people write graffiti on monuments they disapprove of. Other times people destroy them for financial gain, breaking the memorial and selling its materials for scrap. It’s unfortunate but that’s the way it goes. Alas I could not embed it directly into this post, but here is a news clip we showed to the students yesterday in class. It shows some vandals tearing down a stone wall at the Philadelphia Union League Club and tearing out its brass banister. The news article has been updated since yesterday and apparently they have a strong idea, even the name, of who it might be. It’s an extraordinary clip.

This article from the Wall Street Journal came through my in-box earlier today and I thought I would pass along. Remember that one of the primary missions of the World War One Centennial Commission is to build a memorial in Washington D.C. I did not know until reading this earlier today that the studio work is being done here in New York City, in the Bronx no less. From the looks of it things are proceeding well. In an era when luxury condos are going up seemingly on every corner here in Gotham, even in the out boroughs, it is warming to see work like this being carried out here the way it once was. Check out the piece.

I noted with interest the passing of Phil Chess earlier this week. Though I would not put too much into it, it was fitting that Chess, a fixture in the Chicago music scene for well over half a century, died the week the Cubs made it to the World Series for the first time since 1945. Phil and his older brother Leonard were the founders of Chess Records, one of the independent labels that sprung up after the Second World War to record the urban blues. The brothers started in what we’ll euphemistically call the entertainment industry when in 1938 they began operating juke joints catering to the South Side’s growing African-American community. I’m simplifying here but when their Macomba Lounge burned down in 1950 they used the insurance to fund what would become Chess. The brothers would spend the next decades recording Muddy Waters, Howlin’ Wolf, Chuck Berry, Sonny Boy Williamson, Little Walter, Etta James and scores of others.

Chess Records Studios as seen in 2012

The story truly began during World War One. In The Warmth of Other Sons Isabel Wilkerson notes that the Chicago Defender mentioned in passing in its February 5, 1916 edition that northern railroads were facilitating the movement of African-American laborers from the South to the North to work in the munitions plants. After the war the Chess brothers were part of that other Great Migration; their father, Yasef Czyz, came to the United States from Motal, Poland (today part of Belarus) just after the Great War. He soon sent for his wife and children. By the time Leonard and Philip reached their mid-twenties the blues too had come age. Leonard in particular spent much of the early 1950s traveling not only the South but through Northern industrial hubs such as Detroit, St. Louis and Gary, Indiana–essentially anywhere within driving distance from Chicago where Africans-Americans lived, worked, and socialized–to plug the Chess catalog and scout for new talent. Phil was the quieter, younger brother who kept things running.

I have always been conflicted about the Chess Brothers and their cohorts. On the one hand there is no question that they recorded, disseminated, and thus saved an essential component of American–and today, world–culture. On the other hand their enterprise was built on a foundation of exploitation of that talent. That exploitation became only more apparent when the Rolling Stones, Eric Clapton and others came along and began making real money; in the 1960s those once-pesky things like contracts, copyrights and royalties went from ancillary issues to matters of serious economic consequence. One can’t argue that it is not part of the story.

The Chess family has maintained–not without merit–that while their business practices were sometimes unorthodox, they looked after their artists in their own ways. This meant things like paying for funerals and medical expenses, occasionally bailing someone out of jail, and dirty work like paying for abortions in those years prior to Roe v Wade. Let’s not kid ourselves; we’re talking about bluesmen here. It is a messy and human story from a time when America was a harder place and people did what they had to do to get along. Today the blues is securely canonized, but such was not always the case. The life and times of Phil Chess were–and still are–part of why it is so mythologized.

Where the F Train rises above ground to cross the Gowanus Canal once stood a sign for Eagle Clothes. Eagle opened its plant here in Brooklyn in 1951 and did a fair business in Ivy Style and gentleman’s clothing until closing in the late 1980s, a victim of outsourcing as well as our nation’s unfortunate turn to casual wear. When Mayor Vincent R. Impellitteri toured the site in July 1951 he called it “one of the most complete and best equipped factories he has ever seen.” It provided over a thousand jobs, no small thing given that the the Brooklyn Navy Yard was scaling back and would eventually close in the mid-1960s. In the decades after the World Wars there was no longer a need for battleships.

Eagle plant literally outfitted The Man in the Gray Flannel suit, manufacturing the wardrobes for the production of that 1956 film right here in Brooklyn. That’s just one example of Eagle’s reach. Abraham & Straus was a major Eagle retailer. Rod Serling wore Eagle Clothes for much of his time as producer, writer, narrator on The Twilight Zone. (He also wore Kuppenheimer for a time as well.) Every time I saw that Eagle sign in the fifteen years since my move here until its tearing down three years ago I could not but help to think of Rod Serling. The photo here came to me yesterday and I thought I share on this Sunday morning.

I was at the Brooklyn Museum of Art this morning and afternoon for two separate meetings. On the way, going up Eastern Parkway, I came across the small plaque you see here. I have seen these several times over the years and have even written about them here a little. There used to be many in Cadman Plaza as well, but they seem to have disappeared during the recent renovation. If anyone saved them I have no idea. Note how the tablet says “Died in the World War.” That means it was placed in the 1920s or 1930s. If it were dedicated later, the marker would say “First World War,” or words to that effect to differentiate it from the later conflict. 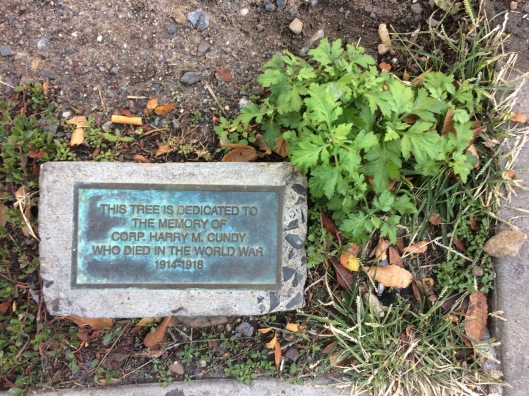 The tablet is nearly a century old but as you can see the tree in the small plot is obviously much younger. You can see the marker in the upper right hand corner of the little square.

This got me curious about the other trees. Directly behind the one you see above is this larger tree with its own tablet dedicated to another doughboy. I imagine, given its size, that this big boy goes back to the time of the placing of the marker.

For even greater perspective, here are the two trees in one image.

To give you some perspective if you live in Brooklyn, the trees above are on the eastern side of the Brooklyn Public Library’s central branch. Now a little up the parkway, almost in front of the botanical garden, are these two stumps. My guess is that these trees too were dedicated for Brooklyn’s Great War fallen and that they were felled somewhere later in their life. Sadly the plaques too are gone. 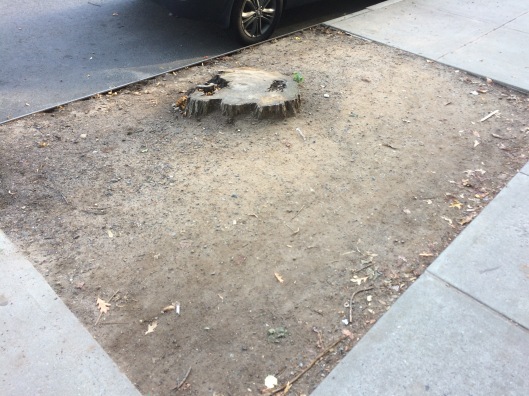 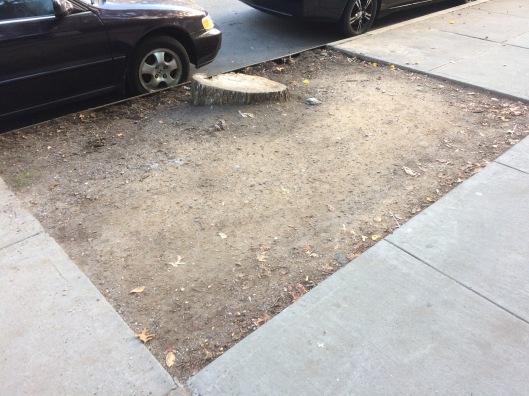 Cobblestones embedded in some of the other trees give a sense of time’s procession. 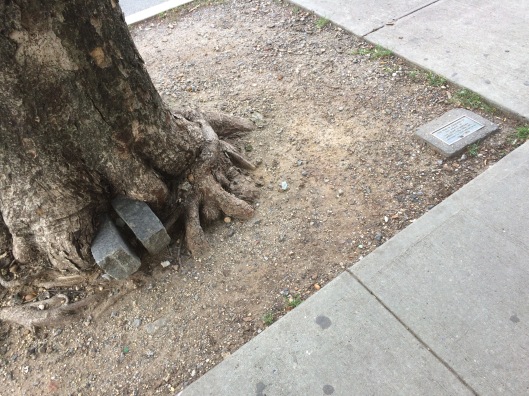 Vandals too take a toll. Tablets are often stolen and sold for scrap metal. This was a problem especially during New York City’s hardest years in the 1970s and 1980s. Note the stone, sans tablet, in the lower left corner.

We are getting the front end of the Hurricane Matthew rainfall here in New York City. It makes for a relaxing Sunday, especially when I don’t have to leave the house at 7:30 to go to Governors Island. I was out-and-about yesterday running some errands in the city when I came across this window display in the Oxford University Press office on 35th and Madison. A quick perusal shows that OUP has created a small online site dedicated to the NPS’s 100th. Most passersby certainly walk past this with a sense of incongruity, not realizing that there are at least a dozen Park Service sites in and around Greater New York City.

I always found it curious that Woodrow Wilson created the Park Service in August 1916, what with the presidential election in full swing and Europe mired in the death and destruction of the Great War. Just how important he believe the Park system to be is something I suppose we will never truly know. It is a flawed institution in many ways, for reasons mainly outside of its own control, but our national parks are still, as the saying goes, one of our best ideas.

The above photo came through my in-box today and I thought that with the baseball post-season beginning this week it would be apropos to share. This is Babe Ruth saluting General John Pershing outside the State, War and Navy Building in Washington D.C. Ruth had recently joined 104th Field Artillery of the New York National Guard at Pershing’s request as a way to generate interest in the Citizens’ Military Training Camps. The Army needed all the help it could get half a decade after the Treaty of Versailles; the military drawback of the early 1920s meant that the United States again had a small fighting force.

A little digging shows that Ruth had sought a khaki uniform in New York but could not find one for his large frame. It is interesting to note that by today’s he is not that large. This is 1924 and he actually looks relatively slim, certainly slimmer than we came to know him as he grew older and stouter due to his excesses. It says something that a man of this physical stature would be considered stout for his time, and that a uniform could not be found in his size in all of New York. Ruth reported to the Quartermaster General’s office in Washington to be fitted early on May 28 and reported to Pershing for this photo op after that. Photo op is the right phrase: a basic search reveals several outtakes of the two men saluting, smiling, and/or shaking hands.

The Yankees were in Washington to play the Senators in on odd two-game road trip that lasted all one day. The Yankees and Senators split a double-header at Griffith Stadium. The Bambino went 3 for 8 in the two games. Ruth visited numerous Citizens’ Military Training Camps in the years after this photo was taken. By the endow the decade Ruth had apparently had enough; in April 1930 he informed Major General Hanson E. Ely, commander of the Second Corps Area at Fort Jay on Governors Island, that he was stepping down. Though again a “civilian” Ruth continued making a contribution, signing bats and balls to be given as trophies at CMTC athletic events until at least the mid-1930s.