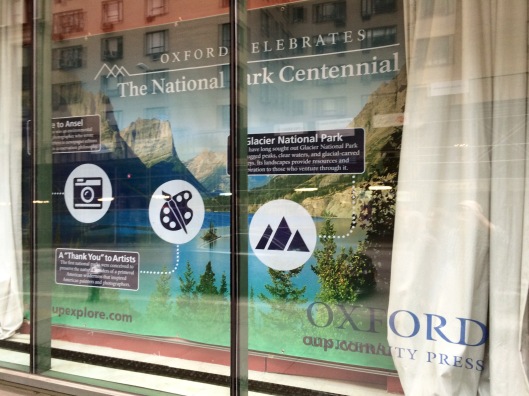 We are getting the front end of the Hurricane Matthew rainfall here in New York City. It makes for a relaxing Sunday, especially when I don’t have to leave the house at 7:30 to go to Governors Island. I was out-and-about yesterday running some errands in the city when I came across this window display in the Oxford University Press office on 35th and Madison. A quick perusal shows that OUP has created a small online site dedicated to the NPS’s 100th. Most passersby certainly walk past this with a sense of incongruity, not realizing that there are at least a dozen Park Service sites in and around Greater New York City.

I always found it curious that Woodrow Wilson created the Park Service in August 1916, what with the presidential election in full swing and Europe mired in the death and destruction of the Great War. Just how important he believe the Park system to be is something I suppose we will never truly know. It is a flawed institution in many ways, for reasons mainly outside of its own control, but our national parks are still, as the saying goes, one of our best ideas.