I have not been out of the house yet, but I cannot express how fortunate we were personally through Hurricane Sandy. We, our friends, and loved ones are fine. 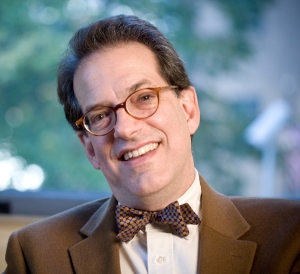 I have never met Ulysses Grant Dietz, the great great grandson of the the general & president, but he comes across as a fascinating and dynamic individual. For one thing he is a senior curator of decorative arts at the Newark Museum, one of the finest museums in the country. It was he who led the pressure against the government to clean up Grant’s Tomb in the 1980s and early 90s, when the site was blighted with graffiti, crime, and drug use. The tomb reopened in 1997 for the 100th anniversary of its dedication. I had known that Dietz had published some art and design monographs. What I had not known until today was that he is also a novelist, of two gay vampire novel no less. He published his first novel in 1998–years before the contemporary vampire phenomenon went mainstream; that book was nominated for a Lambda Literary award in the Science Fiction/Fantasy. The sequel, Vampire in Suburbia, is available now. In this interview he talks about his work, fatherhood, his relationship of 37 years, writing and more.

“You have to know some facts, but the most interesting things are uncertain.”

As with Irene last year we are as ready as we will be for Hurricane Sandy. I worked in the morning and the Hayfoot left with me to load up on supplies. When I returned I went to Green-Wood Cemetery to stretch my legs before the deluge. I got back about a half hour ago and the wind had picked up significantly. To say that the cemetery had a unique vibe in the hours before the storm would be putting it mildly. I found this Civil War veteran’s headstone, with the old bench next to the tree, quite moving. Note the Grand Army of the Republic medallion at the lower left. 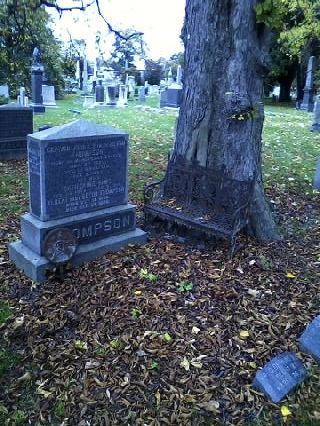 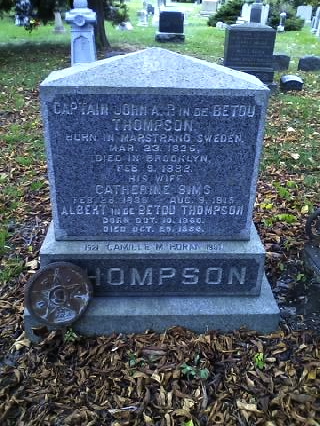 A quick internet search reveals that Captain John in de Betou Thompson, born in Sweden, lived at 308 President Street and died in Brooklyn in February 1882. 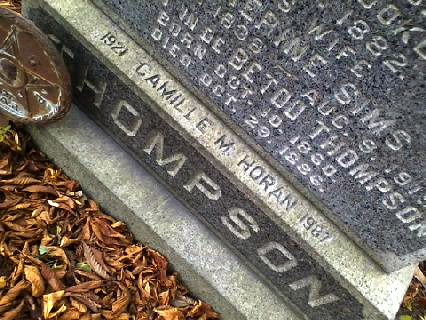 It is somewhat difficult to make out but Camille M. Horan–a granddaughter?–died in 1987, just twenty-five years ago. I couldn’t help but wonder who put the bench under the tree.

Waiting to ride the storm out here in the County of Kings. Wherever you are, I hope you are safe. 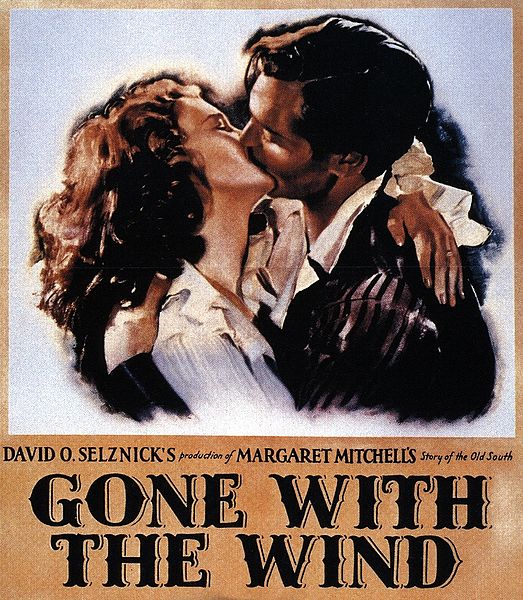 From the You Never Know What You’ll See Next department:

The former black marketeer has read it. So has the beautiful young librarian, and the aging philosophy professor who has spent his life teaching the ruling doctrine of this isolated outpost of totalitarian socialism. At times it seems as if everyone in Pyongyang, a city full of monuments to its own mythology, has read the book.

In it they found a tortured love story, or a parable of bourgeois decline. Many found heroes. They lost themselves in the story of a nation divided by war, its defeated cities reduced to smolder and ruins, its humbled aristocrats reduced to starvation.

The book is “Gone With the Wind.”

The more one thinks about it the less surprising it is. 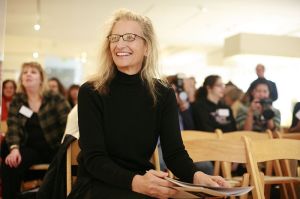 Photographer Annie Leibovitz was in Gettysburg yesterday for the opening of her exhibit at the GNMP Visitors Center. She even got to spend the previous night at the Sherfy House on the battlefield. Her latest show is called Pilgrimage, and is based on a book of the same name. The last several years have been difficult for Leibovitz, with the death of partner Susan Sontag and financial reversals that cost her a great deal of money and aggravation. In something of a rut, she assessed what if most important to her and how she wants to move ahead by looking back; from that came this exhibit. For Leibovitz taking stock meant visiting places of historical and natural significance here in the United States and abroad that meant something to her personally. One of the drawbacks to being a commercial photographer, even a gifted one, is that too often the emphasis is on the adjective at the expense of the noun. Subjects in Annie Leibovitz: Pilgrimage include Graceland and Monticello, Eleanor Roosevelt’s Val-Kill, Old Faithful, Thoreau’s Walden Pond, and Niagara Falls to name a few. Walking the Peach Orchard and Devil’s Den must have been something for someone as knowledgable about the history of photography as Leibovitz. Certainly she knows her Gardner and Brady. Ansel Adams’s studio had been another stop on her pilgrimage.

It is good to see her getting back to work like this. Her talents had stagnated over the past decade. The celebrity photo shoots had become exponentially less relevant while the spreads themselves had grown increasingly outlandish and gratuitous. Seemingly gone were the simple images such as those of John Lennon and Yoko One taken in December 1980 with which she had made her reputation. Pilgrimage is a return to simplicity for the photographer, who turned sixty-three earlier this month. The exhibit will be on display in Gettysburg through January 20, 2013 before moving to other cities.

William Zinsser always says that what cannot be said in 300 words or less is not worth saying. To prove it he once wrote 300 words about Ellis Island that proved as eloquent a synopsis of the immigration station that I’ve read. The New York Landmarks Conservancy just posted this video that captures Islands 2 & 3 in just under 3 1/2 minutes. It seems like so long ago now that I volunteered there. Good times. I know things move on but a part of me will miss the old ruins of the southern island when they are fully renovated. 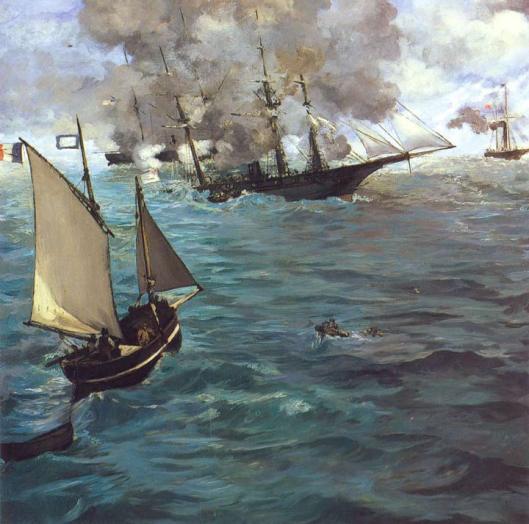 The Battle of the Kearsarge and the Alabama

I just booked the bus tickets to take the Hayfoot and a friend to the Barnes Museum in early November. We visited the old Barnes four years ago and are eager to see what they have done with the new facility. I have heard mixed reviews. Another great museum in the City of Brotherly Love is the Philadelphia Art Museum. One of the works in its collection is Manet’s The Battle of the U.S.S. “Kearsarge” and the C.S.S. “Alabama.”  For some reason the exhibition catalog for the Metropolitan Museum of Art’s 2003 show Manet and the American Civil War came through my in box the other day. Alas this one somehow fell under my radar nine years ago, probably because I returned to graduate school in January ’03 and was too busy. I am sitting here having my Sunday coffee entranced by the story of Manet and the Kearsarge. The Met Museum website explains:

On June 19, 1864, the United States warship Kearsarge sank the Confederate raider Alabama off the coast of Cherbourg, France, in one of the most celebrated naval engagements of the American Civil War. The battle was widely reported in the illustrated press and riveted public attention on both sides of the Channel. When Kearsarge later anchored off the French resort town of Boulogne-sur-Mer it was thronged by curious visitors, one of whom was the artist Édouard Manet. Although he did not witness the historic battle, Manet made a painting of it partly as an attempt to regain the respect of his colleagues after having been ridiculed for his works in the 1864 Salon. Manet’s picture of the naval engagement and his portrait of the victorious Kearsarge belong to a group of his seascapes of Boulogne whose unorthodox perspective and composition would profoundly influence the course of French painting.

It is a fascinating story on many levels, artistically, socially, diplomatically, and otherwise. For one thing it is often lost on us that the rest of the world, or at least Europe, was paying attention to our Civil War. It makes one see Manet with a different perspective as well.  Check it out here, and enjoy your Sunday. 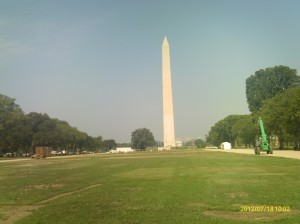 The last few times I visited Washington I noticed a great deal of construction on the Mall. I assumed most of it was stimulus money, funds being spent by the current administration to boost the economy while improving infrastructure. A great deal was happening around the Lincoln Memorial among other places. As it turns out much of the work taking place is the Park Service and Corps of Engineers trying to improve the levees that protect the swampland that is our nation’s capital. A major breach in 1936 caused considerable damage to the Mall area, and a rainstorm in 2006 caused flooding up to three feet in 2006. Unfortunately, the new African American Museum is being laid on the lowest point in the area.This could be a story with major longterm implications. 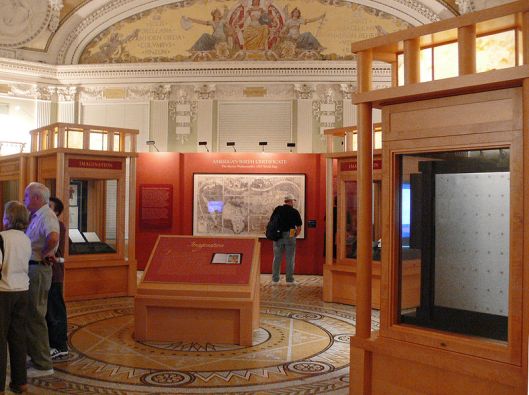 I’m not sure what to make of this, but…

The Library of Congress announced Tuesday that it will launch [a] blog [of] diaries, letters and other writings pulled from its collection. It will chronicle the sacrifices and accomplishments of both North and South to accompany a major new exhibit, “The Civil War in America.”

The idea is for historical figures to “blog” the Civil War in their own voices through their own correspondence from the period. This will either be really good or really cheesy. I’m looking forward to seeing what they do with this. The potential is certainly there; the LOC holds a significant amount of source material to pull from to say the least. November 12 is the opening date for the exhibit and website.