Yours truly was at Baruch College for a conference this morning when he came across this statue of Bernard Baruch in the Vertical Campus building. Baruch’s ties to City University of New York dated back to his time at City College in the late nineteenth century. When he died fifty years ago in 1965 he left a sizable chunk of his fortune to what was then the Bernard M. Baruch School of Public Administration. About a year later the Baruch School became the full-fledged, four-year Baruch College. Apparently there are several statues such as this one sprinkled here and there across the country; Barcuh was called the “park bench statesman” for his affinity to mediate on important affairs seated on a favorite perch in Lafayette Park across the street from the White House. 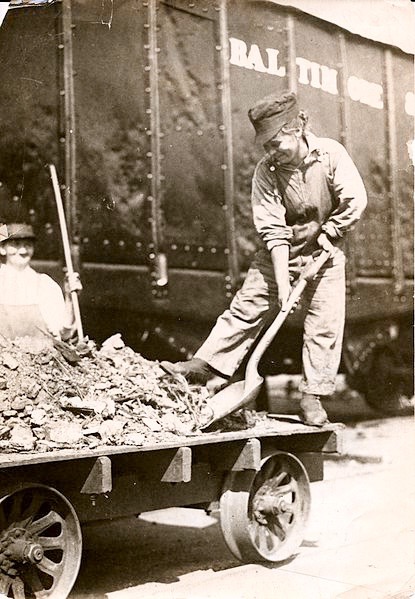 Women working on the railroad in the Allied war effort as part of Bernard Baruch’s War Industries Board, Glenwood, Pennsylvania, circa 1918

Baruch was a consigliere to presidents from Woodrow Wilson, to FDR, Ike and beyond. He ran the War Industries Board during the First World War. Really it was people like Baruch who kept the trains running on time and the goods flowing across the Atlantic. There is something so tactile about statues such as this one, where you can get up close and touch it. Artistically this quite deliberate and allows a person to connect with the subject in way that is impossible when he/she is up on a pedestal. It reminds me of the Lincoln statue in front of the Visitors Center at Gettysburg that always has a crowd around it. I had him to myself at 8:30 but when I left around 4:00 sure enough there were folks sitting next to BB.