This is the second of a two part series on visiting Civil War battlefields.  In case you missed it, part one is here.  There has never been a better time to experience our Civil War sites than today.  I hope you are able to visit at least one during the sesquicentennial.

Rule 6:  Don’t be frustrated by how little you know

The first time I visited Gettysburg, in 2008, I realized just how little I knew of that campaign.  I’m no Harry Pfanz, but my knowledge of events in southern Pennsylvania in June and July 1863 is now considerably greater than it was three ago.  Acquire an awareness of the site before visiting, but realize that most of your learning will take place after you leave.

Rule 7:  It’s not just the battle, it’s the battlefield—and what it means

Visiting a historical site allows us to make a connection to the past in a tangible way.  There are few things more meaningful to me than walking a Civil War battlefield. Ironically, however, I am less interested in the minutiae of the battles than the causes, legacy, and meaning of the war.  Without question, one needs a firm understanding of the military aspects of the conflict to understand how and why it played out the way it did.  It was the slim victory at Antietam that made Lincoln’s release of the Emancipation Proclamation a few days later possible.  If Sherman does not take Atlanta in September 1864, it is possible McClellan wins the White House in November and the Confederate States achieve independence.  Lincoln understood the importance of military affairs as much as anyone.  As he said in the Second Inaugural, “[It is t]he progress of our arms, upon which all else chiefly depends.”  There is still a lot of work to be done to tell the full and true story of the military side of the war.  Just remember that the battle isn’t the whole story.

Civil War historiography has undergone a transformation in the past several decades.  With this change has been the rise of Memory Studies.  How many monographs have you seen in recent years titled The Civil War, [insert subject], and Memory?  I believe this is a good thing.  One of the most revelatory books I’ve read in recent years is Timothy B. Smith’s The Golden Age of Battlefield Preservation: The Decade of the 1890’s and the Establishment of the First Five Military Parks.  Professor Smith, a former ranger at Shiloh National Military Park, traces the preservation and memorialization of the Shiloh, Gettysburg, Antietam, Vicksburg, and Chickamauga/Chattanooga parks in the 1890s.  He explains how Union and Confederate veterans literally built monuments to themselves and why the decisions they made in the late nineteenth century effect how we understand those engagements today in the twenty-first.

The reasons why the veterans and their successors made the decisions they did are, at least to me, as fascinating as the battles themselves.  Especially now during the sesquicentennial, historians, journalists, and rangers are analyzing the parks not only to understand more fully what took place there but to unravel the myths that too often have taken the place of history.  The same is true of Civil War cemeteries, historic structures, and other sites. 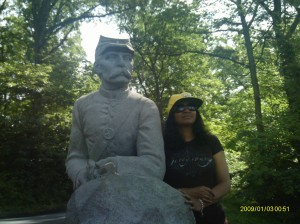 Built primarily in the 1880s and 1890s when the soldiers were aging, the monuments functioned to tell the veterans’ story after they were gone.

Rule 8:  Visit when you can

Shelby Foote advised that one should visit during the time of year the battle took place.  For instance, one would ideally visit Fredericksburg in December to experience the cold and note the lack of foliage on the winter trees.  The key word is ideally.  The reality is that it may not be possible to do so.  Visit when you can.  Research the trip to see if any events are happening that you would like to see—or avoid.  It was only luck that helped me miss Noise Week in Gettysburg during my first visit.  Personally, I avoid anniversary time because it tends to be busy.  Note too that many worthwhile events, such as the Antietam Illumination, take place at different times of the year than the battle anniversary.

Little Round Top at 3:00 pm on a Saturday is not the best idea.  As I said in part one, visitation is currently at record levels across the Civil War national parks.  Nonetheless, quiet places are there to be had by those adventurous enough to stray off the beaten path. 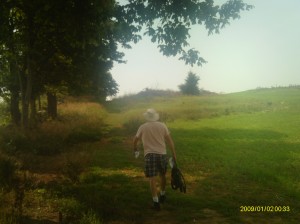 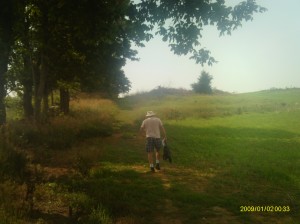 Life is too short not to stop for an Italian ice. 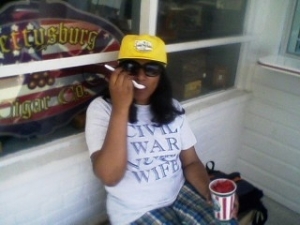