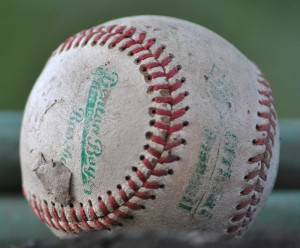 The smaller the ball the better the writing.  That is the adage when it comes to sports writing.

No sport lends itself to the world of letters more than our National Pastime.  It has always seemed to me, though, that baseball fiction has always lagged behind non-fiction.  Jim Bouton’s Ball Four is Exhibit A.  I think the reason is the dichotomy of the fan base. There is of course some overlap between the groups, but in general fans of the game can be divided into realists and romantics. There has always been a tension between the Bull Durham crowd and the Field of Dreams crowd.  (For the record, I am a member of the former.) Too often novelists have tried to appeal to one group or the other–to the detriment of the story they are trying to tell.  When you throw on top of that the often reactionary elements who run the game and control a great deal of its institutional memory, it is not a good prescription for the creation of fine art.  Mike Doherty of Salon mounts a defense.