Hey everybody, I hope you are enjoying your holiday season. The Hayfoot and I have been relaxing and watching The Rockford Files on our iPad. Posting will continue to be light at best between now and January 6th. This is the time of year when I put the Civil War aside for a spell and recharge the batteries. I have some interesting projects I will be working on in 2013 which I will explain in full when the holidays are over.

Last week on his invaluable Civil War Memory blog Kevin Levin asked people to chime in on what they read in 2012. I posted a comment and thought I would expand it a bit more at the Strawfoot. Here is the short list of books I most profited from in 2012, along with a few I am looking forward to in 2013:

Dark Horse: the Surprise Election and Political Murder of President James A. Garfield–I had heard about this when it first came out, but was intrigued about Garfield only after reading Adam Goodheart’s 1861: The Civil War Awakening. We underestimate the lives of the Gilded Age presidents and leaders at our own expense.

The Devil’s Own Work: The Civil War Draft Riots and the Fight to Reconstruct America–Barnet Schecter covers so much more than the turmoil in July 1863. This title helped me a great deal with my volunteer work at Governors Island. One of my intellectual goals is to become an authority on role New York City and State during the Civil War period. 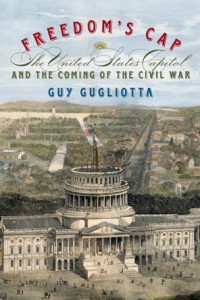 Seward: Lincoln’s Indispensable Man–The Secretary of State gets his due. There’s a lot on the antebellum period, including figures such as William Henry Harrison and Millard Fillmore. Again, the tendency is to dismiss such figures because they don’t fit into the popular narrative of our nation’s history. I finished this and started Freedom’s Cap: The United States Capitol and the Coming of the Civil War immediately afterward, which covers the same period and gave me a greater understanding of the 1850s. Too many people read about just the war–I suppose because they think the battles are “fun”–but don’t look into the causes and consequences of the conflict. This is, to put it charitably, short-sighted.

Last Train to Memphis: The Rise of Elvis Presley–I don’t understand why people read those piece of shit Elvis biographies when Peter Guralnick explains his rise and fall so movingly.

Sick from Freedom: African-American Illness and Suffering during the Civil War and Reconstruction, by Jim Downs

The Peninsula Campaign and the Necessity of Emancipation: African Americans and the Fight for Freedom, by Glenn David Brasher

I’m going to read the two above back-to-back.

John Quincy Adams, by Harlow Giles Unger–My interest comes from the numerous trips we have taken to the National Portrait Gallery over the past few years. You can’t walk the halls of the NPG and not become intrigued with the people behind the canvases.

All the Great Prizes: The Life of John Hay, from Lincoln to Roosevelt, by John Taliaferro—This comes out in May. Hay was of course Lincoln’s secretary (with John Nicolay). Less well-known is that he became a big player in the second half of the nineteenth century.

Careless Love: The Unmaking of Elvis Presley—Volume two in the Guralnick portrayal

Lots to look forward to in the coming twelve months. I hope you have a healthy, happy, and productive New Year.