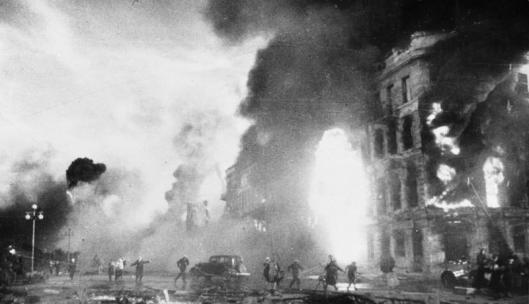 In October-November 1989 my brother and I took a month long tour of Europe. It was an organized affair with a European-based company in which there were many well-educated and well-travelled people from around the world. We were by far the youngest ones along for the ride, which gave us a sense of gravitas and cachet among the older crowd. People enjoy being around the young. Many of the people from that tour are gone now, which fills me with sadness. The trip started in London, continued by ferry to the Continent, on through Holland, into Germany, Poland, the Soviet Union, FInland, Sweden, and back to Britain. We had the good fortune of seeing the Berlin Wall the week before it came down. I remember getting the news from one of our fellow travelers (no pun intended) that they were tearing it in the lobby of our St. Petersburg hotel. Who could have known just the week before that such events were about to take place?

The most lasting impression of the trip was the ubiquity of the WW2 memorials seemingly present in every town along the way. This was nearly a quarter century ago, and for many WW2 was still as much current events as it was history; the candle laid on a Warsaw street corner to remember a loved one on All Saints Day might have been placed for a sister or father, not some distant ancestor never met. Seeing hundreds of such candles clustered together where some massacre had taken place was something I will never forget. In the Soviet Union memorials to the Great Patriotic War were equally ubiquitous. We saw them in Minsk, Smolensk, Moscow, St. Petersburg, and every other stop along the way. So much has happened in the world between 1989 and today. The Berlin Wall. The end of the Soviet Union in 1991. The 50th anniversary of the Second Word War. The rise of the internet and digital technology. These moments from the late fall of 1989 are embedded in my memory not just because they were turning points in 20th century history–which of course they were–but because they coincided with my own rise to adulthood. It is very much a before and after. We remember most what happens when we were young.

I have mentioned many times that I no longer recognize the anniversaries of Second World War the way I once did because the WW2 generation has all but stepped off the stage. Today the WW2 anniversaries commemorate historical, not current, events, which is not to say there are not many in the world for whom the events of 1939-1945 are not still deeply personal and individual tragedies. That’s something to think about when we throw around phrases like “fifty million people were killed in the war.” February 2 is on of the most meaningful dates of the conflict. Seventy years ago today the Battle of Stalingrad ended after 200 bloody days and two million individuals perished.