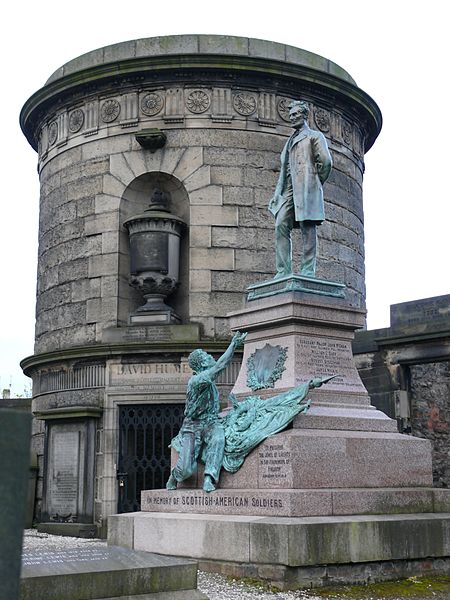 An interesting vignette came to my in-box yesterday about the George E. Bissell statue of Lincoln that stands in Edinburgh’s Old Calton Cemetery. Bissell’s name does not carry the same weight as Augustus Saint-Gaudens, Daniel Chester French, or Paul Manship, which is unfortunate because the sculptor was very much their equal. Bissell created one of my favorite statues in all of New York City, the monument to Chester Arthur that stands in Madison Square Park. Bissell’s Arthur stands adjacent to the more lauded Saint-Gaudens’s tribute to Admiral Farragut. Sadly, both are off the tourist path and stand equally unnoticed by New Yorkers themselves as they go about their daily routines.

Bissell’s Lincoln was dedicated in 1893 and was the first of many Lincolns erected outside of the United States during the era. As you can see, it fits neatly into the “Standing Soldiers, Kneeling Slaves” motif described by Kirk Savage in his book of the same title. We have our own such statue, for Henry Ward Beecher, here in downtown Brooklyn. Bissell’s Lincoln is more than a tribute to the Great Emancipator, however; it was also built to pay honor to the Scots who fought for the Union. If you look closely, you will notice that it stands next to the tomb of philosopher David Hume, which could not have been coincidental. We are clearly meant to associate the two men and to think of them as equals. In the tradition of the time turnout was significant for the dedication, so much so that tickets were required despite the blustery conditions. It is lost on us today how seriously people of the period took these kinds of things. Bissell’s Lincoln is a good reminder, too, that the world was paying attention to the events in the United States during our Civil War.