Today was orientation day at Governors Island for all volunteers. It was so good to be back and to see many folks I had not seen since last summer. Here are a few pics, some of which were taken by my great friend Sami Steigmann.

The view from atop the circular fort is stunning. Castle Williams opened to the public for the first time in two centuries just last year.

Here is a closer look at the Freedom Tower, which when finished will be the largest building in the Western Hemisphere. Coast Guard brats who lived on the island in the late 1960s and early 1970s recount watching the original World Trade Center structures going up little-by-little from the island.

This building, on the southern part of the island managed by the city, is set for demolition at 6:00 am next Sunday, June 9. A park is going up in its place.

A living history unit, of high schoolers from Rhode Island no less, is camping out and interacting with the public this weekend. 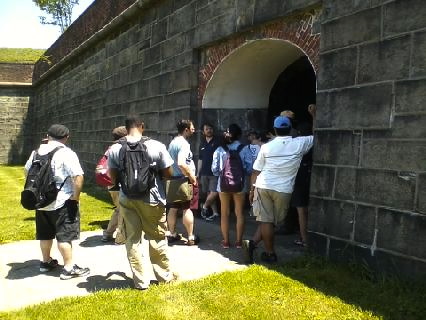 The orientation stopped at Fort Jay. This System Two fortification is at the highest point on the island and so thankfully suffered little damage during Superstorm Sandy, though there was some to the old sculpture atop the sally port.

Modeling with the park’s new toy

Last year there was much excitement that we would be getting a canon in time for the 2013 season. Rangers were unhitching this baby from the truck as we walked by.

It is going to be a great summer at Governors Island. Come see for yourself.