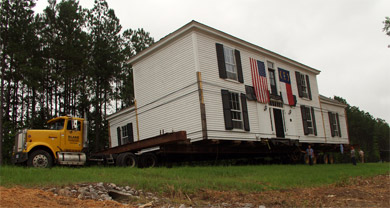 It is bright and early Sunday morning. I am off to Governors Island in a few minutes. It will be interesting to see how many people come out on what will be a steamy July day. It was so hot yesterday that I stayed in the house and watched the Gettysburg coverage I missed earlier in the week. I also re-watched Moving Midway, Godfrey Cheshire’s film about the moving of his family’s antebellum plantation. If you have not seen it, I recommend. Here is my review from a year or two back. Enjoy your Sunday.

My wife and I watched an extraordinary film last night called Moving Midway.  Midway is a plantation built in 1848 on land bequeathed to the Hinton family of North Carolina decades prior to the American Revolution.  Concerns over urban sprawl led the current owner, Charles Hinton Silver, to a dramatic decision in 2003: he would literally lift the house from its foundation and move it several miles across country to a more secluded spot.  The undertaking is documented by his cousin Godfrey Cheshire, a New York film critic who grew up in a Raleigh and cherishes the memories of his boyhood visits to the place his mother called “out home.”

Cheshire discovered something unexpected halfway through the project—he has over one hundred African American relatives.  Here the film takes a dramatic turn.

Cheshire is aided by Robert Hinton, a professor of Africana Studies who also grew up in Raleigh and whose ancestors were slaves on Midway Plantation.  The two did not meet until the relocation project was underway but share an immediate rapport.  Struggling to make sense of it all Hinton confesses to Cheshire that, “This would be easier if didn’t like you.”  Still, the underlying tension is at times palpable.  Robert and Godfrey do not appear to be themselves related.

Both men struggle with their identity.  Professor Hinton explains that he has always been conflicted between his African American and Southern identities, with the Southern often winning out.  He also recounts that as a young college student in the 1960s he felt more comfortable in the presence of white graduate students than the Black Power crowd he briefly embraced.  Cheshire’s struggles are only beginning, as he explores the implications of the complicated story for himself, his family, the region, and even the nation itself.  He concludes that the only way to see the South today is as a mixed race society.

Moving Midway is many things: a meditation on the meaning of home; an exploration of family; an examination of American history; and even a short course on cinematic history.  (As a film critic Cheshire is well positioned to examine the Moonlight and Magnolias version of the Plantation South offered up by Hollywood during the years of the Studio System.)  Above all it is an example of what some call courage history, the willingness to look closely even at the people and things we love and ask the difficult questions.

I could go on but won’t.  Moving Midway is available on dvd and Netflix.