I am typing this from the public plaza at the National Portrait Gallery/American Art Museum. This was the site of the old Patent Office, where Walt Whitman and Clara Barton both worked at different times. I had an interesting conversation with the ladies in the Luce Foundation Center, during which they showed me some great turn of the twentieth century photographs of that portion of the building. The Smithsonian did an extensive renovation in the early 2,000s, but much remains the same. Even the Luce visible storage area has the look it did previously; if Patent Office officials could come back to life they would know where they are. Many visitors never make their way all the way up here.

One Life: Martin Luther King Jr. opened late last month and will be running through 1 June 2014. I was taken back by the immediacy of the photographs, most of which are now more than half a century old. For better or worse I have always interpreted art through a historical context and so these galleries are right up my alley. The Smithsonian staff have done a great job rotating the collection; each time I come there is always something new to see. Here were my two favorites for today:

The France Croissee, by Romaine Brooks

I am hoping that the World War One centennial does for our understanding of the Great War what the sesquicentennial has been doing for the American Civil War. We deserve more than the lions led by donkeys interpretation of 1914-1918,  just as we deserved more than the moonlight and magnolias version of the War of the Rebellion we had to put up with until not that long ago. Oddly, Romaine Brooks was not American; she was born in Italy (1874) and died in France (1970). As much as I love the painting, I found it curious that it was in the American Art Museum until learning it was a gift of the artist. The Barton/Red Cross angle is a great piece of serendipity. The gauntness in the cheeks is haunting. 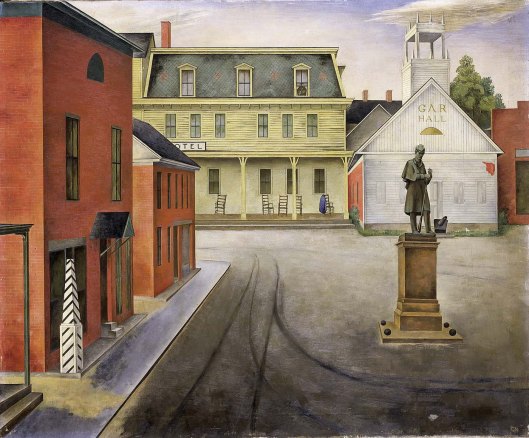 The Hopper-esque Town Square was painted by another artist not born the United States, though O. Louis Guglielmi eventually did move to America. It is not displayed here, but the painting is housed in a frame labeled WPA Federal Art Project. As you might guess, the statue and GAR Hall are what caught my attention. Painted in the mid-1930s, in the depth of the Depression, Town Square captures the bleakness of the era. Guglielmi seems to commenting on an America that is no more, economically and otherwise. The Civil War had been over for seventy years by this time, about the same amount of time as between WW2 and today. I don’t imagine there were too many GAR members left by this time, just as the Greatest Generation has now just about passed on.