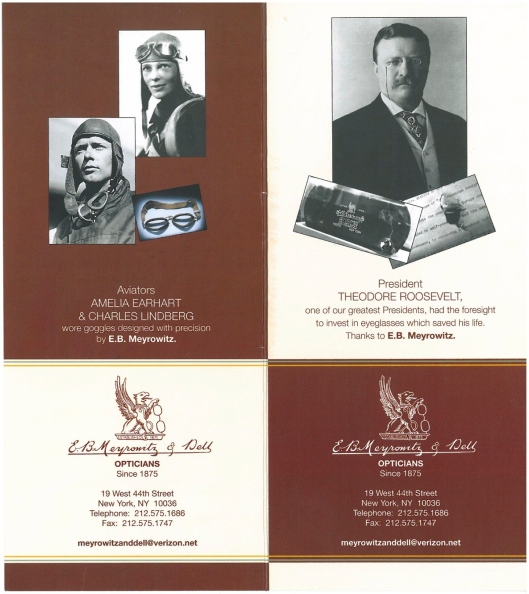 A friend of mine just got a new pair of glasses. As it turns out, he got his new specs at the same place Theodore Roosevelt got his. Knowing of my interest in TR and my volunteer work at the Birthplace, he grabbed me this brochure.

Eyewear played a significant role in Roosevelt’s life. When he was a boy, young Teedie was bullied on a carriage ride by some older toughs who mocked and bullied him because of his small stature and spectacles, a humiliation he never forgot. Years later he decked a man in a Montana bar for calling him “Four Eyes” and otherwise being a menace. The beat down added to the city slicker’s prestige among the locals, who had previously viewed him as an effete New Yorker and not the rugged outdoorsman and boxer he had been at Harvard. Lieutenant Colonel Roosevelt  reported for duty during the Spanish-American War with multiple pairs on his person; his eyesight was so poor that he was afraid an only pair might get damaged.

Meyrowitz was begun by Emil Bruno Meyrowitz of Prussia, and has been around since 1875. It is kind of cool that it is still here.