Here is the second installment of the interview with Rebecca Behrens, author of When Audrey Met Alice. In case you missed yesterday’s segment, this just-releaed novel tells the story of first daughter Audrey Rhodes, who discovers the secret diary of Theodore Roosevelt’s teenage daughter Alice in the floorboards of her White House bedroom.

The Strawfoot: And your novel’s protagonist, Audrey Lee Rhodes, Tell us about her and her family.

Rebecca Behrens: After Audrey’s mother becomes the first female president of the United States, her family relocates from the Twin Cities to Washington. Her father takes on the role of “First Gentleman” as well as maintaining her career in scientific research at a university. Unlike Alice Roosevelt, Audrey is an only child, and a few years younger than Alice was during her time at the White House. But Audrey still forms a real connection with Alice by reading the diary entries—their emotional experiences of living in the White House and being the children of important politicians is similar, despite the century separating them.

You visited the Theodore Roosevelt Birthplace with your parents, both of whom knew a fair amount about the twenty-sixth president. Did they inspire your interest in history? 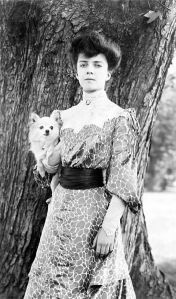 Alice Roosevelt as she was in 1902

Absolutely! I was very lucky to be raised by two history-loving parents. We were also a family that enjoyed travel, and our road trips always included stops at historic sites. Specifically, interest in Theodore Roosevelt runs in my family—my great-grandfather was present at the famous speech TR gave in Milwaukee, Wisconsin, right after having been shot in an assassination attempt. My father has done a lot of reading and independent research on the Roosevelts (and has visited almost all of the Roosevelt NPS and NHS sites, from the Inaugural Site in Buffalo to Sagamore Hill on Long Island to Theodore Roosevelt National Park in North Dakota). I first learned about Alice from my dad’s Roosevelt stories. I found her fascinating and decided I needed to find a way to write about her, one day.

What other historic sites, especially Roosevelt sites, have you visited?

I’ve visited Sagamore Hill and Youngs Memorial Cemetery in Oyster Bay, and I’ve spent time in Washington, DC, although I need to look up Alice’s house there. I also unknowingly visited where Alice’s Auntie Bye (TR’s sister Bamie/Anna Roosevelt Cowles) lived in New York City, at what once was 689 Madison Ave and 62nd Street. It was while I taking a walk and stopped for a break at that very intersection that I came up with the initial idea for the plot of When Audrey Met Alice. Later I found out that not only was that a Roosevelt family site, but Alice spent a fair amount of time there as a young person. Weird!

You are a children’s book editor. What advice might you have for aspiring writers?

I think that the most important qualities you need to be a writer are patience, dedication, and curiosity. Writing and publishing a book is a wonderful experience—but it’s also a long haul! Curiosity can lead you to a great concept, dedication is necessary to see it through, and patience is essential because writing is often slow, at all stages of the publishing process. I’m not a historian, so I had to work hard to try to do this setting and subject justice. But because I found the subject so fascinating, it was easy to keep trying.

Did your recent trip to the White House live up to expectations?

Absolutely! It was thrilling to be there in person. Looking out toward the Washington Monument from the inside of the South Lawn was a surreal, fantastic moment. My visit was also very useful in terms of improving the factual accuracy of my book. I got to experience visitor security firsthand, understand the scope of the space (I expected the lawn to feel larger and more exposed than it does), and soak up sensory details—like how the grounds smell and what ambient noise is around.

Where can people go to find out more about When Audrey Met Alice?

There is more information about the book as well as links to resources like an educator’s guide and an annotated version of Alice’s diary on my website, www.rebeccabehrens.com.