Update: The week before last a few of us at the Theodore Roosevelt Birthplace got to talking about this photograph. That led me to do a little online digging. which in turn led me to this piece by Heather Cole, the Manuscrips/Curator of the Theodore Roosevelt Collection at Harvard’s Houghton Library. The photo is from a 1912 political cartoon that also featured William Howard Taft and Woodrow Wilson. Alas, Theodore indeed never rode the moose. It would have been a great story if real but the truth is the greatest story there is.

I reached out to Ms. Cole to share both my post below and the story of the conversation the rangers and I had at the TRB and she graciously returned my message. I’m glad she researched this and shared it on the Houghton Library blog.

I was searching for something in The Letters of Theodore Roosevelt this morning when I stumbled upon a photograph I have seen numerous times. I was startled because it was one of those things I had only seen online and had assumed to be a fake. Here it is as I snapped it on my cellphone, uncropped to emphasize that it came from his Letters. 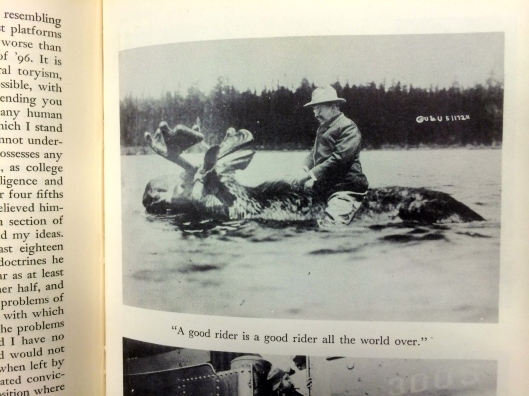 I was so surprised because although I have seen this photo a number of times it has always been online. What’s more, it is usually accompanied with a cheeky quote or comment pasted onto it. I have even posted it myself on the Facebook page. It seemed–and still seems–like one of those pics that seems to good to be real. One always semi-assumed that when one saw it.

This was not the internet however. Roosevelt’s Letters were edited in eight volumes for Harvard University Press in a early 1950s by a team of esteemed scholars. It has been in continuous print for sixty years. That would seem to have a little more cachet than just something one sees online.

Photoshopping obviously did not exist back in the day, but the manipulation of images is as old as the photography itself. I would love to know more about this photograph and whether it is indeed the real thing.