Good morning, all. I am sitting on our patio with a cup of coffee enjoying this beautiful day.

Today’s Puck cartoon comes from Decoration Day 1895. At this time Roosevelt had just taken over as one of New York City’s police commissioners. Before joining the NYPD he had been in Washington running the U.S. Civil Service Commission. In that capacity he tried to rid government service positions from cronyism. He was only partially successful. 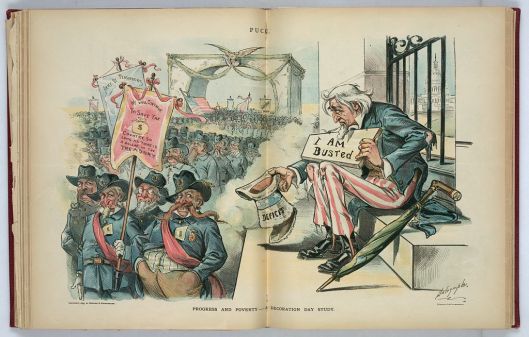 Two years into the second Grover Cleveland Administration the United States was mired in a terrible depression. Two of Uncle Sam’s biggest outlays during these lean times were for the Post Office, which Roosevelt had done his best to streamline, and Civil War pension benefits, which the uber-powerful Grand Army of the Republic veterans group protected fiercely and successfully. 1895 was just thirty short years after Appomattox. These veterans were moving from middle age into senior citizenship and their influence would hold sway for a good 15-20 more years.