Yesterday a friend and I visited the New-York Historical Society to see the exhibit about textiles and the Civil War. Textiles, in this case cotton, obviously were a major cause of the secession crisis and the war. The exhibit though went beyond cotton’s role in the conflict. Included were quilts, flags, housewives (hand stitched sewing kits), clothes, and other items. Among the most touching artifacts were swatches from the Jordan Marsh catalog in various textures and shades of black from which to make mourning clothes. Jordan Marsh is yet one more thing from my past that no longer exists but that is another story.

I do not know if this is true or not, but the exhibit states that there were no hidden messages within quilts for fugitives on the Underground Railroad. It’s funny how these types of stories get propagated and then never entirely go away. More than once I myself have readjusted what I say in tours and public talks after discovering a long-held assumption is false. One that comes to mind off the top of my head was that there was once a tax on having closets in one’s home.

It is an extraordinarily thoughtful show and runs through August 24.

One thing that caught my eye was this little Zouave uniform made for a little boy. The reason it stuck out, besides the fact that it is beautiful is because little Theodore Roosevelt had one that was similar. (See it here.) 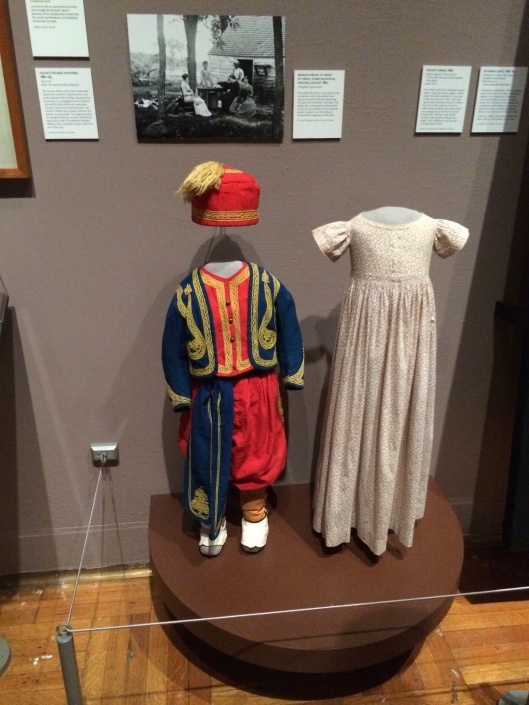 Speaking of the New-York Historical Society keep in mind that the museum has an exhibit about New York City and the Civil War running through September 28 in Building 18 on Governors Island. I still have yet to check this out. There is still two months to go in the Governors Island season.

3 thoughts on “Textiles and the Civil War”