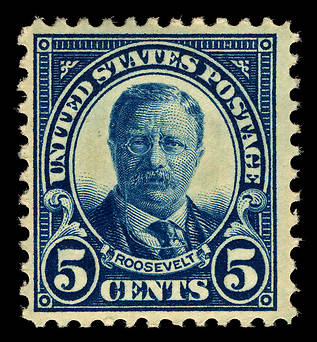 Imagine Theodore Roosevelt’s likeness on a two cent piece. It sounds funny and yet almost happened. In September 1919 the Women’s Roosevelt Memorial Association petitioned the Treasury Department for such a coin. The last two cent piece had gone out of circulation in 1874. The proposal passed the U.S. Senate in May 1920. It stalled in the House when, curiously, a congressman from New Jersey pushed for a two ½ cent Roosevelt coin. This new proposal opened a whole new can of worms. The American Bankers Association threw their, uh, two cents in and came out against the proposal. The bankers argued that a 2 ½ center would necessitate the creation of a half cent piece to make change. The stalemate proved too much and the whole thing died soon thereafter.

Still something came of the measure. On October 27, 1922 the Postal Service issued a 5 cent Roosevelt stamp. It was the first time Theodore Roosevelt’s likeness appeared on an American postage stamp. His widow Edith was present at the ceremony held in Oyster Bay. Ted Jr. and Alice also received some. The stamps went on sale in a limited run in Long Island, Washington, and right here at the Theodore Roosevelt Birthplace. Note that this was while the site was under still under construction. The 5 cent Roosevelt proved especially popular for international mail.

image/Roosevelt missed his chance at the 2 cent piece but made up for it with this gorgeous five cent stamp first issued in 1922.