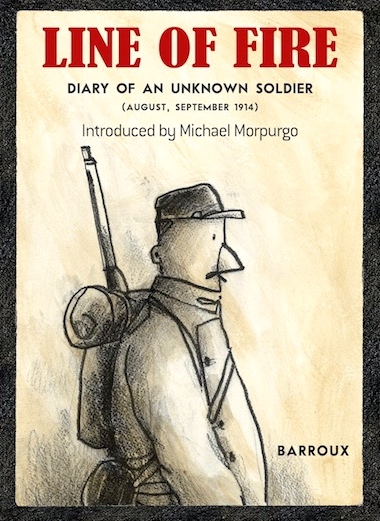 Barroux is a French illustrator who has a number of children and adult graphic novels to his credit. A few years ago on a cold winter day like today he was walking from the Bastille to the Place de la République when he came across some workers emptying an apartment. The men invited him to take anything he wanted, and being a good artist he stopped to check out what if anything might be of interest. Incredibly there in the detritus were some almost-century-old notebooks written by a poilu during the Great War. The notebooks covered August-September 1914 and proved authentic. This French soldier was in the war for just two months but had an eventful series of episodes. As he describes it, he and his comrades had their “great send off” at 5:00 am on August 5. This was very early–the first week–in the war.

Frustratingly very little is known of this diarist. We know he was married and that he had a friend named Fernand, and that’s about it. The diary ends on September 12, 1914, but there is extraneous material and ephemera up through 1917. Why he stopped writing in 1914 and what became of him are mysteries that will never be solved.

Barroux illustrated the text with bold, dark sketchings that render the journal entries that much more poignant. He clearly did a great deal of work to capture a French society that is now long gone. The beaks drawn as noses offer just the right amount of absurdity to the tale. And of course the whole situation was absurd. How Europe went from peace to suicidal cataclysm in six short weeks is something we will never fully comprehend.

I hope more things like things come to light and during the centennial. It seems an opportune time for publishers to take advantage of the public interest. The London Guardian has some excerpts.