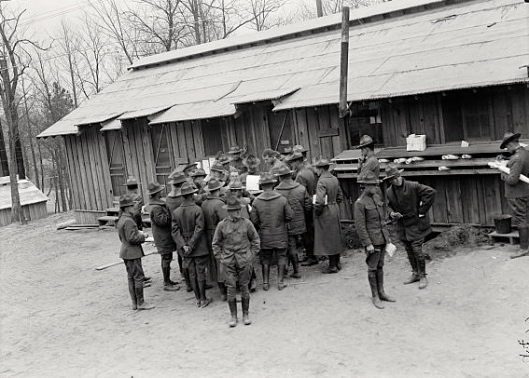 Camp Meade, Maryland, 1917: 21-year old Edward Shenton and the men in his company arrived here on July 4 of that year

When I got home from work late on Monday evening there in the mailbox was The Lost Sketchbooks: A Young Artist in the Great War. Its author, Rex Passion, sent it to me after seeing something I had written recently about John W. Thomason. I intend to write more in depth about Rex’s new book after I finish and fully absorb it. I have spent the past few days reading it on the subway during my daily commute. Rex has written the book around the drawings of Edward Shenton. Shenton, who had not heard of until Rex’s initial email, enlisted in the Pennsylvania National Guard in 1917 and served as an engineer in France. Like John W Thomason he was both soldier and artist. Their styles are similar, though I would say Shenton had a greater command of depth while Thomason better depicted motion. Both left a strong visual record of the war as they saw it, from the mundane to the horrific.

Shenton’s sketchbooks were tucked away in family closets and basements before being rediscovered by his descendants a few years ago. Thus began the project to tell Shenton’s story and bring his work to a larger audience. I hope his artwork finds the reception it deserves over the next few years during the centennial.

2 thoughts on “The Lost Sketchbooks of Edward Shenton”