Here is the second and concluding part of the Rex Passion interview. Yesterday’s installment brought Edward Shenton up to the Armistice. 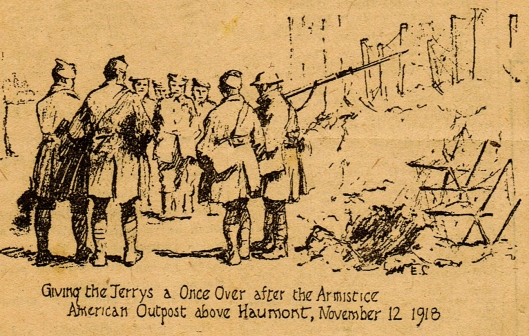 The 28th Division remained in France for six months and as the weeks passed, there was less and less for the soldiers to do and more and more time for Ed to draw. He was in the villages of Vignuelles, Uruffe, Colombey-les-Belles and Le Mans sketching everything he saw before he finally boarded the ship for home. 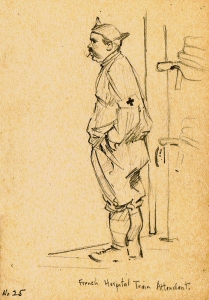 On April 20, 1919 the engineers of Company B boarded the SS Finland and sailed back home They marched in a parade down the streets of Philadelphia and celebrated a job well done. 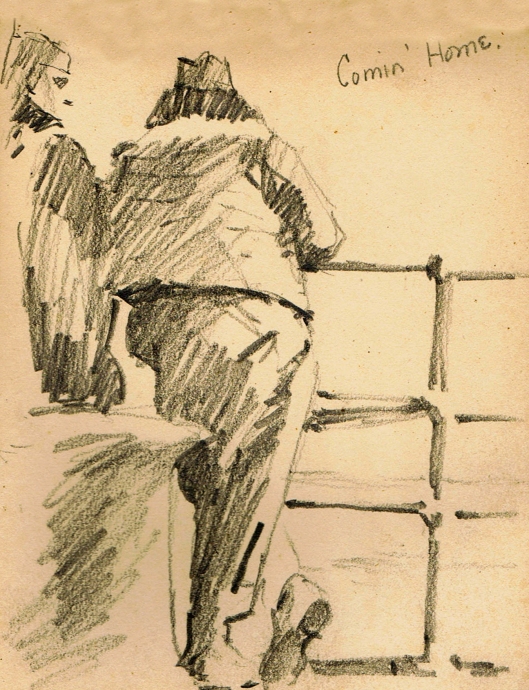 The Strawfoot: What were the conditions under which he made the sketches?

Rex Passion: Before he left for training camp, Ed bought several canvas-bound sketchbooks from Wanamaker’s department store in Philadelphia, along with pencils, graphite sticks and a water color set. In both Camp Meade and Camp Hancock evenings and Sundays were his own and he had a good deal of time to draw. He was able to store his art supplies in a foot locker so he could use the larger (9” x 10 ¾”) sketchbooks and he could also paint with watercolors. All this changed when he shipped overseas.

Once he landed in Calais, he was ordered to store his personal effects and limit his kit to what he could carry on his back. One of the things Ed did was to cut his 6” x 9” sketchbooks in half. I suspect this was to be able to keep them inside his helmet where they would be protected from the weather and especially the mud. The first two drawings in this sketchbook were cut when the book was cut, the others were drawn to fit the smaller pages.

Some of Ed’s wartime sketchbooks were mailed home to his father in Philadelphia and have his address on the cover. Some of the drawings in these books have place names obscured by the sensor
Many of the images from Ed’s time in combat are drawn on larger sheets of loose paper (13 ½” x 9 ¼”). The captions are carefully drawn in ink, but the drawings are done in pencil. There are a couple of instances where sketches in a cut-down sketchbook are very similar to those on a larger sheet. It appears that the sketchbook images were re-drawn at a later date on larger sheets. Perhaps this was even done once Ed was back home.

There are, however, many images on larger sheets for which there is not a corresponding one in a canvas-bound sketchbook. Also, there are no drawings from his trip from the US to France in 1918; all the sea drawings were done on the return trip. Ed would have had a great deal of time to draw on the boat trip over, and many new things to see. Are these sketchbooks still missing?

After the Armistice, Ed had an ever-increasing amount of free time and his sketching was accordingly prolific. While Company B was still in the town of Hattonchatel, near Vignuelles Ed was drawing in a new type of sketchbook. This one is smaller than the ones he brought from the states (4 ¾” x 7 ¼” versus 6” x 9”) and they are of a lesser quality. He used them for the next six months. I suspect he bought these sketchbooks in France.

It seems that even the additional sketchbooks could not hold the volume of his artwork. There were a large number of loose drawings, some of which appear to have been torn from a roll of paper. 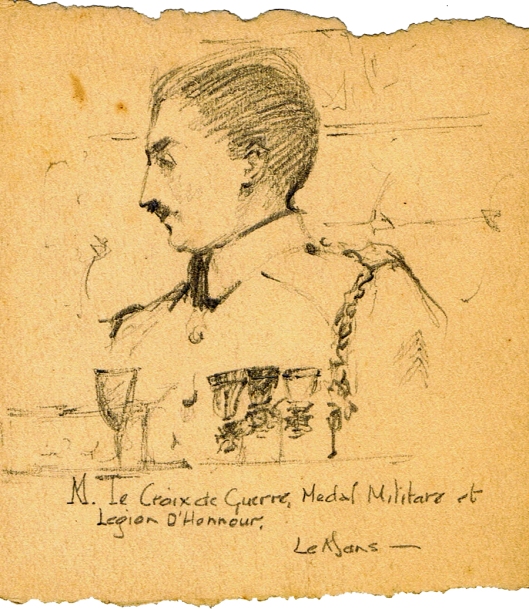 How did you get involved in the project? What was the process?

I came to know Ned Shenton, Ed’s son, through The Explorers Club in New York, where we were both members. About five years ago we were chatting and he asked me if I would help him put up a website to honor his father’s artistic career. As part of this project I scanned a large amount of Ed Shenton’s artwork and among the boxes of images were the sketchbooks and drawings from World War One. When I saw them I was amazed at the intimacy and detail of the images and the first thought of a book crossed my mind.

A couple of years later I decided to take the next step and I asked Ned to bring back the books I had scanned earlier as I was not sure the sequence of my scans matched the sequence of Ed’s sketches, but when I looked at them, I didn’t recognize any of the drawings. As it happened Ned had brought an additional eleven books to add to the nine I had already scanned and I was off and running.

I had a great many images, some with dates and some which I could associate with events, but in general they were in a state of disorder. While I was looking around the internet for information about Ed’s company, I came across a book entitled Soldiers of the Castle, which was a history of Company B, 103rd Engineers written by three of the company’s officers. I now had the day-by-day journal of all the events that effected Ed Shenton and his company of more than 200 soldiers.

Soldiers of the Castle is it is an easy and compelling read and different from any other unit history I have read. It gives not only dates and places but some of the feelings and experiences of the authors, which I am sure were shared by the men. It was pivotal in not only organizing the Ed’s drawings, but also giving a clue as to the state of mind of Company B as a whole.

One of the other tools I used in writing the book was Google Maps. The details of Company B’s travels are well documented in Soldiers of the Castle, such that I could follow them from place to place. It was sometimes difficult to correlate a place name in Soldiers with one on a map, but in the end it worked out quite well.

One feature of Google Maps which I found very helpful was its “Street View.” By placing an icon on a road one can see a 360 degree view of the countryside. As the roads of rural France have not change appreciably in one hundred years, I could virtually walk down the paths where the soldiers marched and see the sights they were seeing.

The last, and most important part of the process was the book design. At one point I thought I knew what I was doing, and that I could put together an acceptable book given the text and images I had, but I was wrong.

Veselina Tomova is one of the premier book designers in Newfoundland, Canada and a neighbor of ours in St. John’s. She is responsible for the very compelling and highly readable layout and the feel of the book in one’s hands.

How many sketches are there and how many made it into the book?

In the nearly two years between July 4, 1918 and May 1, 1919, Ed Shenton produced at least 500 drawings, sketches and watercolors related to his training, the war, and his post-Armistice time in France. I suspect there are more that have been, at least temporarily, lost.

One of the hardest parts of putting together this book was choosing which ones to use. In the end I chose a total of 151 images, 21 of which were Ed’s earlier work, done before he enlisted.

It is my hope that more of Ed’s wartime artwork will surface and will be added to his legacy.

What has been the response?

The response to The Lost Sketchbooks, A Young Artist in The Great War has been very positive. Everyone who has actually seen and handled the book, has liked it. I have gotten many positive reviews with nary a negative comment. I suspect that over time that will change but until then I will bask in the glow.

Several historians have told me that a collection of newly-discovered first-hand artwork from the Great War is a very rare thing and that the book is an important historical document.

I have had a good deal of interest from people in the art world as well as history aficionados and praises for the book from both groups.

Several people have also commented on the detail and intimacy of the drawings and of Ed’s story.

The Lost Sketchbooks, A Young Artist in The Great War is available through my website, www.thelostsketchbooks.com and through Amazon.com

Rex Passion, thanks for your time.