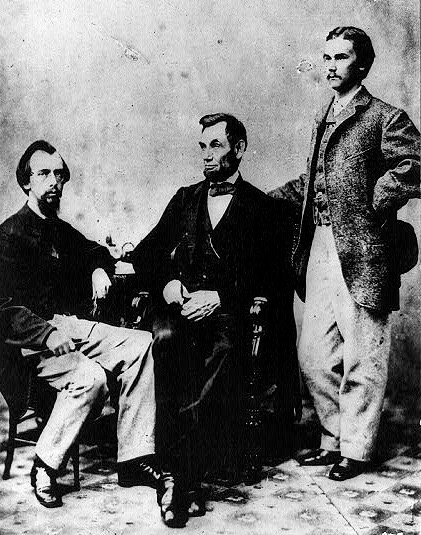 John Nicolay (seated) and John Hay (right) were best friends who worked selflessly for Abraham Lincoln. After the war they toiled equally hard to craft his legacy and defend the Unionist perspective of the war.

Last night I finished Joshua Zeitz’s Lincoln’s Boys: John Hay, John Nicolay, and the War for Lincoln’s Image and gained a lot from reading it. Zeitz traces the relationship between the 16th president and his two assistants from the time they met prior the Civil War all the way through the early years of the twentieth century when Nicolay (1901) and Hay (1905) died. I have always known the general outline of the story of how the two wrote their mammoth ten-volume Lincoln biography in the 1880s. Zeitz does a good job of capturing the two competing and contradictory impulses at work in the decades immediately after the war. On one hand there was a tendency to deify the martyred president. Republicans couldn’t go wrong waving the bloody shirt. At the same time the Lost Cause narrative was gaining traction in these years, with such figures as Jubal Early laying the foundation for what would prove to be a remarkably resilient narrative about why the war was fought and how it was lost. We’ve seen the dying throes of this narrative play out in the headlines and cable news shows over the past several weeks.

Hay and Nicolay were very much writing against this narrative, though ironically the Lost Cause was being disseminated in the same place at the same time. While The Century was publishing excerpts from the highly anticipated biography, that magazine was also publishing pieces from Battles and Leaders of the Civil War. B&L was drum and bugle history and sought to give both equal time to the Union and the Confederacy, while strenuously avoiding the cause and consequences of the war. One can only imagine what people were thinking when they read these pieces juxtaposed next to one another, which they did for years. Sometimes Hay and Nicolay could be unfair, especially in their rough handling of General McClellan, who they disliked intensely and were determined to excoriate.

Nicolay and Hay both had long successful careers after the Civil War, including stints overseas in important diplomatic positions. Hay wound up U.S. ambassador to the United Kingdom, where he did so much to build the special relationship that served the U.S. and Britain so well during the First World War and then through the twentieth and early twenty first century. He was of course later Secretary of State in the McKinley and Theodore Roosevelt Administrations as well, where he continued his important work.

(image by Alexander Gardner taken in studio in Washington, D.C. on November 8, 1863, less than two weeks prior to the Gettysburg Address; Library of Congress.)