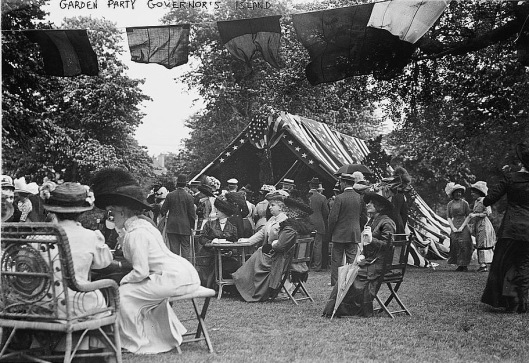 I am sorry for the recent lack of posts. Things have been in full swing at my school. The season has ended at Governors Island but things still come through my in-box, including this photo that I thought I would share. A friend and I were looking at it yesterday and he noted how confining the ladies’ clothes must have been. This image was taken in 1911 and shows how little things had changed style-wise prior to the First World War. This is a full decade after the death of Queen Victoria and one year after the passing of her son Edward VII. One can hardly tell however that the Edwardian Age had come and gone. This scene could have been 1891 just as easily as 1911. The Great War liberated women in a number of ways, including what they wore. Manpower deficits helped put them to work in factories, which meant their clothes had to be more functional; also, shortages in steel and other raw materials made the corset impractical and soon obsolete. Goodbye whalebone, hello brassiere.

This photograph was almost certainly taken in what is now called Nolan Park on May 25, 1911 in recognition of Decoration Day. I say this confidently because there are many similar images taken on that day. This was between Leonard Wood’s stints as commander of the Eastern Department; Frederick Dent Grant was in charge. Note the black cloth hanging as if from a clothesline up top. Images like this are fascinating because we, one hundred years later, know what comes next. Three years later this world of garden fetes and genteel Decoration Days would get swept away by the calamity of the First World War.

(image/Library of Congress via History by Zim)