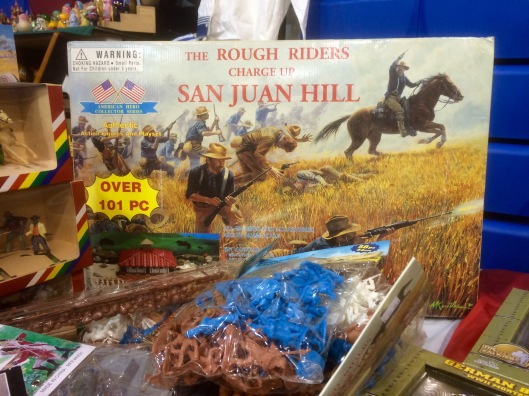 One thing I love about going to toy soldier shows, especially the big one every November in Hackensack–is that one is pretty much guaranteed to see something that a) one never thought one would see, and b) one never knew existed in the first place. That happened again many time today, not least when I saw this Rough Rider playset. No I did not buy it, but I did make sure to take the above photo. A quick internet search informs us that the set comes with 10th Cavalry Buffalo Soldiers, the 71st New York, and individual poses of both John Pershing and Colonel Theodore Roosevelt. I have no idea why this set is not better known. The cover art was even done by banality maestro Mort Kunstler. Now you know that I’m not much for the painter’s work; he did do a beautiful job here nonetheless. I believe this set is from the late 60s or early 70s. The already impressive set already contains over 100 pieces; coupled with a few more troopers this would make quite the living room battle scene.

It’s interesting how the Spanish-American War was something of a laboratory for the U.S. Army a decade and a half prior to the outbreak of the Great War. It is roughly parallel to what the Mexican-American War did for the Officers Corps that fought the War of the Rebellion. The Boer War was much the same for the Brits. In every case, though, even more lessons could and should have been learned.

Speaking of the Great War, I met a few people who, if things fall into place, with whom I ay get to collaborate on a few small things. Time will tell.

2 thoughts on “The Rough Riders in 54mm”