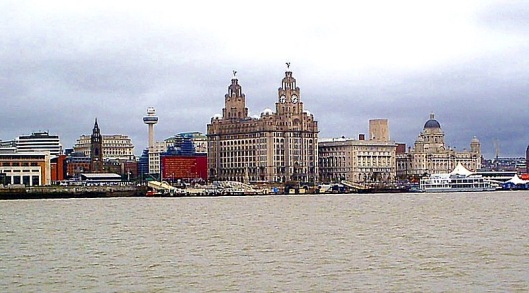 Liverpool (above) was one of Europe’s many port cities from which Europeans flocked to the United States prior to the First World War.

I noted with interest today that the city of Liverpool is to build its own immigration museum. This will not be the first museum in Europe dedicated to the mass exodus from the Old World to the New. Antwerp for one has its Red Star Line Museum, which opened in 2013. In my time volunteering at Ellis Island I always stressed that immigration to the U.S. at the turn of the last century was not a one way street and that the human drama was taking place on the other side of the Atlantic as much as it was at Ellis Island, Baltimore, Charleston, and the other port cities of the United States. Anything less is just half the story.

The Liverpool immigration museum seems to be part of city’s larger strategy to emphasize its cultural heritage. Most famously city leaders plug The Beatles and Mersey’s importance to the band’s sound and rise. And why shouldn’t the city do that?; the rough and tumble town was integral to who the group was. Hamburg, itself another port city instrumental to the Beatles development, opened its own immigration museum, the BallinStadt, in 2007. European immigration to the United States crested a hundred years earlier, 1907, but held steady until the onset of the Great War seven years later, when the sea routes were disrupted and Atlantic travel dropped off precipitately.

(image by G-Man via Wikimedia Commons)