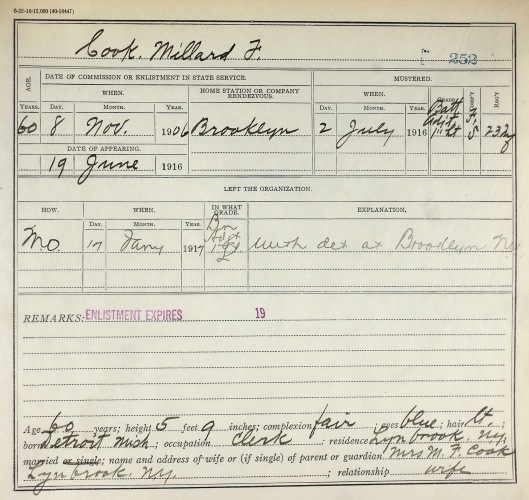 Millard Fillmore Cook served under General Pershing on the Mexican border in 1916. The following year he was discharged from the 106th (23rd) Regiment due to a broken leg. He served forty-one years in the New York State militia.

This month marks one of the smaller but nonetheless poignant moments in the early months of America’s involvement in the Great War. Millard F. Cook was discharged from the 106th Infantry Regiment in December 1917. The 106th was the  designation for the old 23rd New York Infantry Regiment before its calling into national service for eventual deployment to France. Millard F. Cook had joined the 23rd in December 1876 and by time of the American declaration of war in April 1917 was the oldest officer in the entire New York State National Guard. Corporal Cook was in the militia during the Great Railroad Strike in 1877 and was an officer as part of the Punitive Expedition on the Mexican border in 1916. 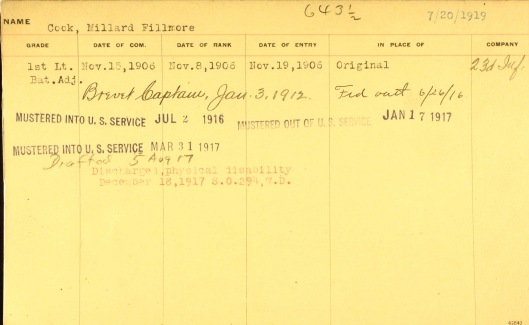 Cook (1855-1934) was born during the Franklin Pierce Administration six years prior to the onset of the Civil War.

Cook was born in Detroit in 1855 but moved to Brooklyn, NY with his family as a young child. He apparently believed in commitment and longevity; Cook was an accountant with the New York Sun for sixty-two years, a national guardsmen for forty-one, and a church musician and musical director for much of that same time. Newspaper accounts show him directing such efforts as Gilbert and Sullivan’s H.M.S Pinafore, the Haydn Vocal Society of Brooklyn, and numerous congregational musical groups for decades. Cook was elected secretary of the 23rd Infantry’s Council of Officers in February 1917. However when the Great War came he was not destined to go to Europe with the men of his unit. The 23rd was nationalized as the 106th that spring, but Cook broke his leg in a car accident during a training exercise in Upstate New York on May 16. The recovery did not go well and he was eventually examined at Governors Island on December 5. Before the end of the year a panel of four physicians at Fort Jay recommended Lieutenant William F. Cook be honorably discharged. He is buried today in Uniondale, Long Island’s Greenfield Cemetery.

(top images via Ancestry.com and bottom from the Brooklyn Daily Eagle courtesy of Newspapers.com)