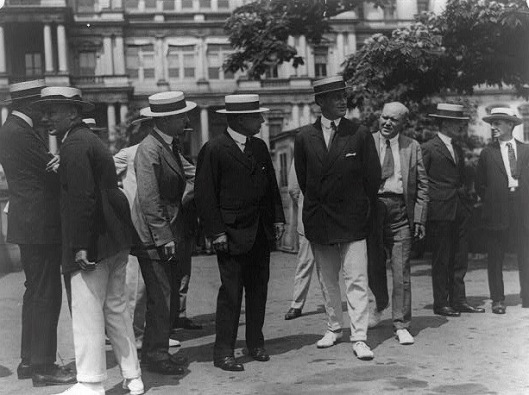 Roosevelt (in white pants at center right) and James M. Cox arrive at the White House with reporters in tow prior to their meeting with President Wilson, July 1920. Cox, with FDR as his running mate, lost his presidential bid that year. Roosevelt was assistant secretary of the navy at the time.

There was big news out of Poughkeepsie last month when Marist College, the Roosevelt Institute and the Franklin D. Roosevelt Presidential Library and Museum announced the completion of their effort to digitize FDR’s Master Speech File. The collection contains over 46,000 items spanning the thirty-second president’s long career. It is often lost on us how hard politicians work and the stamina they need to communicate their message to the people. His frenetic pace in advocacy of the Versailles Treaty is what led to Woodrow Wilson’s stroke; we tend to see FDR as being older when he was when he died, and yet he was only sixty-three. At Yalta he looked twenty years older than that. The collection contains not only the audio recordings themselves but the drafts and final texts of Roosevelt’s words. This is a treasure trove for historians, interpreters, and anyone interested in the history of the first half of the twentieth century, especially the World Wars.