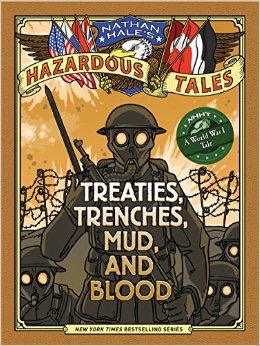 The other day I finished Treaties, Trenches, Mud, and Blood: A World War I Tale, a graphic novel brought to my attention last summer by one of the rangers at Governors Island. Graphic novels became a thing after Art Spiegelman published Maus in 1986. It is hard to believe that was thirty years ago. Even before then Spiegelman’s work had been published in installments before being anthologized. Spiegelman published Maus II in 1992 and won a Pulitzer Prize that same year. At the library where I work we have an entire section dedicated to the genre. If anything graphic novels have become too big in recent years. The quality of the writing and drawing varies markedly from work to work. It is not an easy thing to pull off, especially when one is writing about history related events. The author/artist must internalize and then condense a great deal of information and then make it understandable to both a general audience and the specialists who might be reading it to get the creator’s take on the topic. At the same time he must be true to historical events and the people who lived through them. And the graphics are equally important. The whole point of a graphic novel is to tell a tell with words and images. That’s why they’re called graphic novels.

One need not worry about that here. The narrative and the sketches here are rendered beautifully and with great thought and care. The narrator is none other than “Nathan Hale,” who in more than one book has avoided the noose by spinning a historical tale from the gallows stand to keep the hangmen entertained and their minds elsewhere. I must say it all works rather nicely. The book is ostensibly written for Young Adult readers but kids of all ages, especially those with an interest in the events of 1914-18, will find this an enjoyable and worthwhile read. Treaties, Trenches, Mud, and Blood captures the entirety of the war, from an international perspective, surprisingly effectively, which is no small feat in a work that is less than 130 pages.