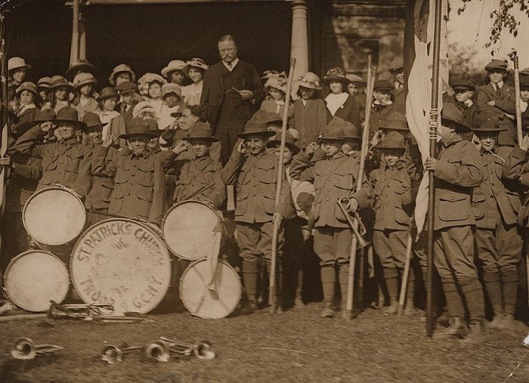 Here is an incredible photo that was taken one hundred years ago today.

May 13, 1916 was Preparedness Day, during which parades advocating for American military planning were held in various locales. This image was taken in Oyster Bay, Long Island, where Theodore Roosevelt led several Preparedness events in his hometown. Here he is on the veranda at Sagamore Hill with a contingent of Boy Scouts. Conspicuously absent from the photo is his wife Edith, who was attending a Preparedness event in Manhattan accompanied by their daughter Ethel Derby, their son Thedore Jr., and Ted’s wife Eleanor. It’s a hunch but I imagine a reason Roosevelt stayed so close to home was that by now he was too infirm to march in that bigger event being held in the city.