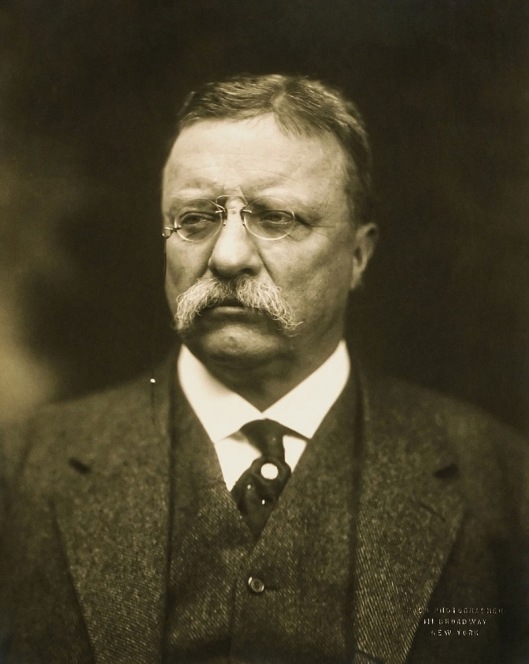 Last week I mentioned Theodore Roosevelt’s brief stopover in Washington DC on his way back to Oyster Bay from Florida. Roosevelt was in the capital for all of a few hours to wish Woodrow Wilson good tidings after the president’s call for war. Congress of course declared hostilities on Germany four days later, on April 6. As I noted, Roosevelt did not get his audience with the overburdened commander-in-chief and headed quickly back to New York. Four days after the declaration of war on Germany however Roosevelt was back in Washington determined to meet with the man against whom he had run for the presidency (along with the other two candidates Taft and Debs) just five years earlier. Roosevelt was determined to push his proposal for a division–to be organized and led by the one time Rough Rider himself–that would fight in France. He and Wilson met for about forty-five minutes at around 11:00 on the morning of Tuesday April 10.

Wilson was polite but noncommittal. The president had a number of competing concerns already on his mind, not least an Army Bill that would allow for a Selective Service draft. Wilson was wary of Roosevelt–how could he not be after everything The Colonel had said about the Administration since the start of the war 2 1/2 years earlier?–but understood the need to at least hear his predecessor out. For one thing Roosevelt was a champion of universal conscription, the measure for which Wilson was now most advocating. After the meeting Roosevelt made clear to the several dozen reporters gathered on the White House lawn that his division would be in addition to any American troops raised via a draft. What is more, Roosevelt declared, the men of his division would fall outside any age, marital or other criteria established by the War Department.

Roosevelt averred that he could equip his division and have it ready for transport to France within two months. This was wildly optimistic, especially given Roosevelt’s experience cooling his heals in Tampa waiting for bureaucratic snafus to be worked before he and the Rough Riders could sail for Cuba during the Spanish-American War. Any American Expeditionary Force sent to Europe would be significantly larger than the fighting force sent ninety miles off the coast of Florida to fight the Spanish. Roosevelt may have forgotten those lessons but he proved prescient about what it would take to field an American Army and have it battlefield ready. Speaking to reporters back in New York the following day, April 11, 1917, he predicted it would take the War Department a full twelve months at a minimum.