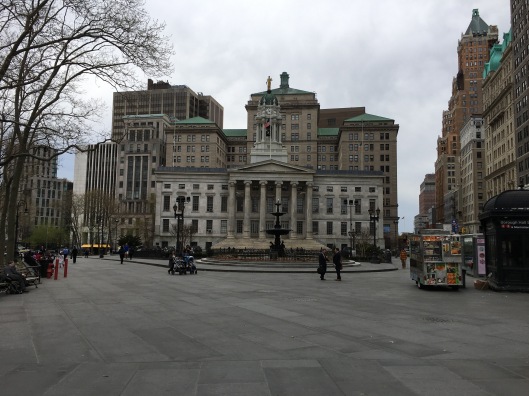 Originally the City Hall of the independent municipality of Brooklyn, Borough Hall was where the Brooklyn Section of Mayor Mitchel’s Committee on National Defense appointed Dykman to be chair on 17 April 1917. The wider commiitee held its meetings at the Manhattan Municipal Building.

Colonel William N. Dykman was appointed chairman of the executive committee for the Brooklyn Section of Mayor John Purroy Mitchel’s Committee on National Defense one hundred years ago today. The meeting of two dozen committee members met at Brooklyn’s Borough Hall, though oddly enough Dykman himself was not in attendance. That his colleagues would appoint him in absentia leads one to think he had agreed to take the post in advance. Mayor Mitchel’s National Defense Committee dated back to November 1915, when pacifist sentiment was strong in the United States. Cleveland H. Dodge, Elihu, Root, and Al Smith were just some of the prominent New Yorkers involved in the Mayor’s Committee on National Defense (MCND). The mayor’s group was an offshoot of Governors Charles S. Whitman’s New York State Committee on National Defense, which had been formed in late October 1915. The now aged Joseph H. Choate brought the statewide principals together at a meeting a few weeks later to see about creating a committee specific to New York City.

The Mayor’s Committee on National Defense advocated for preparedness in the 1 1/2 year lead-up to American involvement in the First World War. Lest one forget however, the United States had been involved in another expedition in the meanwhile; from March 1916 to February 1917 a Regular Army force of 15,000 supported by at least 100,000 National Guardsmen were engaged on the Mexican border. Of the National Guard troops, about 10,000 were from the Empire State. The Mayor’s Committee was determined to learn from the mistakes of the Mexican Punitive Expedition. One way it did this was by conducting a survey of the Guardsmen’s experience. This included questionnaires asking the troops what most frustrated them during their deployment to Texas, as well as a study of the Guardsmen’s civilian employers. The Committee was interested in such things as if the men received civilian pay when called to active service, if their jobs were held for them, and the disposition of civilian employers to losing workers to the call-up. Dykman had been active in all of these endeavors and was eager to put this knowledge to practical use in what would be the significantly larger task of training and equipping men to join the fight in France.