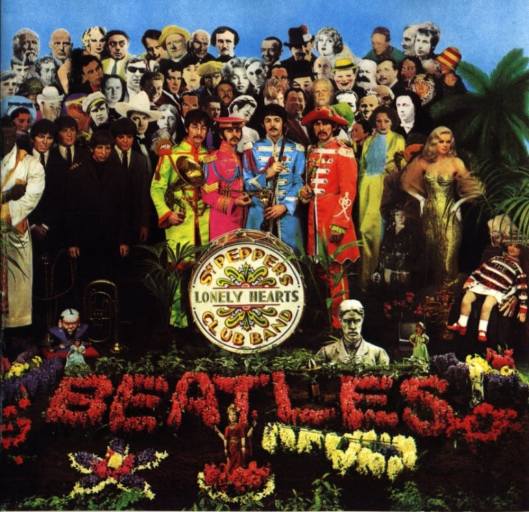 I was teaching a class this past semester in which the topic was the style wear of pop musicians of the 1960s and 1970s. (The course was on the business of the fashion industry.) Students had been tasked to find an iconic image of this or that pop star and discuss the hows and whys of the style of dress. I urged one student to analyze Elton John’s Savile Row bespoke white suit, for instance. Anyways I began the bibliographic instruction session with a discussion of the psychedelic military-inspired suits the Beatles wore on the cover of Sgt. Pepper’s Lonely Hearts Club Band. The words were just out of my mouth when a student scoffed at my saying the Sgt. Pepper is probably the most culturally significant rock album ever made. Not necessarily the best rock album ever made–it might not even the best Beatles album ever made–but the most culturally significant, I averred. I was taken aback briefly until it dawned on me that said student, flush with the confidence of youth, probably had no concept of what Sgt. Pepper represented when it was released. Born in the mid to late 1990s, the student literally might not have known who the Beatles were. Rock music itself is no longer the cultural signifier it once was; rap and hop hop surpassed it a long time ago. Even the “record album” itself is passé; iTunes, Spotify, etc. are where today’s youth get their music. The album itself is no longer the unit of currency. I am not a Luddite but I would argue we have lost something in that, in particular the shared experience that a Sgt. Pepper represented to a cohort.

Sgt. Pepper has been going in and out of style of half a century now and paradoxically feels dated and relevant at the same time. It’s playing quietly in the background while I have my coffee and type these words. In that class a few months back I was trying to explain to the students how the muted greys of Austerity Britain were giving way in the tangerine brightness of mid-1960s Swinging London. Britain’s baby boomers were looking to their past, especially to the styles of pre-Great War Edwardian England, for inspiration. It’s not an accident that there was a clothing store in mid-60s London called “I Was Lord Kitchener’s Valet.” I remember watching Nightline on June 1, 1987, twenty years after Pepper’s release, and the panel discussing the album’s social and cultural impact. That itself was thirty years ago. Look around today and I am sure you will see or hear a reference to the album the provided the soundtrack to the summer of 1967.