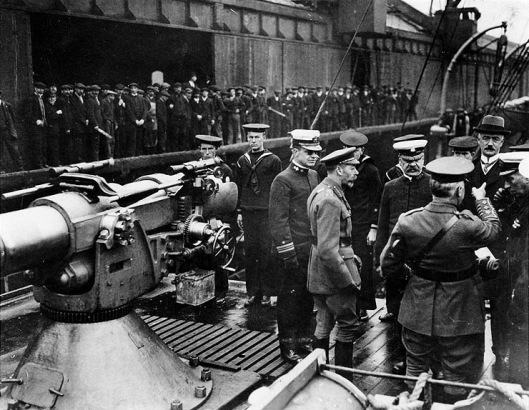 General Pershing’s whirlwind visit to England continued on 9 June 1917 with among other things a visit to Buckingham Palace and an audience with King George V. The Americans’ arrival could not have come at a better time personally or militarily for the monarch. The king was a first cousin of both Kaiser Wilhelm II of Germany and Czar Nicholas II of Russia. All three were grandsons of Queen Victoria, who had died in 1901. Nicholas had been deposed just three months prior to Pershing’s arrival in England, and it was becoming increasingly apparent that Russia might soon make a separate peace with Germany.

The monarch, seen here again on the Finland, showed himself publicly throughout the war to boost moral.

It is telling that when “Nicky” was forced to abdicate he was not taken in by his cousin George.The monarchs of Europe understood how increasingly fragile their grip on power was and each was afraid he might be next. It appears a deal had been in the works for Nicholas, Alexandra, and their children to live in exile within England. King George V eventually decided otherwise–the czar and the civil unrest in Russia were a third rail he refused to touch. Instead the Romanovs lived under housed arrest in Tsarskoe Selo near Saint Petersburg until being assassinated in Yekaterinburg in July 1918.

One mistake Nicholas had made was taking command of Russian military affairs This meant that when the losses mounted he himself shouldered a great deal of the blame. His cousin was determined not to let that happen to himself. While King George V showed himself publicly throughout the war, he largely kept his affairs to photo opportunities and patriotic events. He visited hospitals frequently, handed out medals, and that sort of thing. He also quite consciously spent most of his time in London, setting an example for his subjects not to live in fear. Even Pershing he did not keep that long. The king shook hands with the dozen or so officers in the entourage in mid-morning before speaking to General Pershing for all of fifteen minutes. Then it was on to other business for each man.