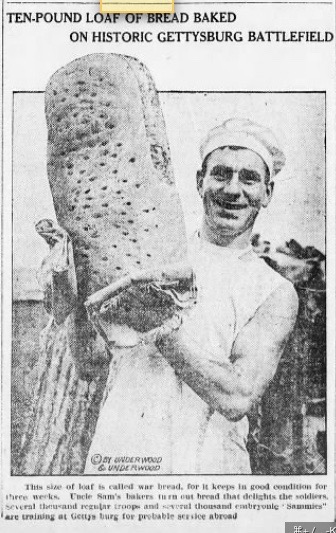 Good morning, all. I have been thinking about Gettysburg all weekend. I was off all this past week and used the time productively to write 4500 words on my book about Civil War Era New York. The goal today is to write 750, which would put me in even better shape. Yesterday I went to the greenmarket on Union Square and pick up some things. The produce is almost in full season, though there is not yet sign of the heirloom tomatoes. I thought I would share this photo of an army baker taken in Gettysburg in July 1917. “War bread” was a concoction developed by the Army to hold the loaf’s freshness for several weeks. They needed the bread; thousands of troops were filing into Gettysburg for training in June – July 1917. This was not Camp Colt, the tank corps commanded by Captain Dwight Eisenhower in 1918, but a more general basic training facility similar to camps sprouting throughout the country that summer.

The Gettysburg army camp was constructed by Brooklyn architect Woodruff Leeming. Leeming attended Adelphi College in Brooklyn and later received his B.S. in Architecture from M.I.T. Five years prior to the Great War he designed the Beecher Memorial Building for Plymouth Church, which was constructed in recognition of the Henry Ward Beecher centennial. Leeming was active in the Brooklyn Institute of Arts & Sciences, what later became the Brooklyn Museum of Art. Woodruff was a major in the Officers’ Reserve Corps and it was under this jurisdiction that he traveled to Gettysburg in early June 1917 to build the camp.