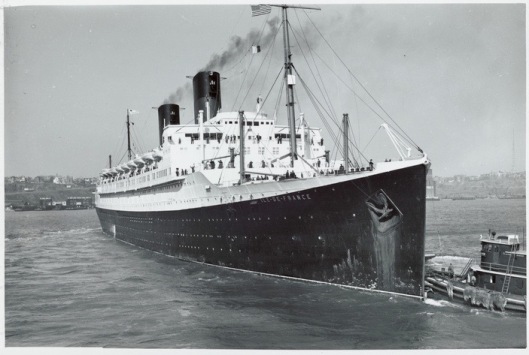 Dr. Schrock went back to France in 1928 and returned to the United States aboard the Ile de France.

I listened to the Mets come-from-behind, walk-off-with-a-homer win last night. They were down 4-0 in the first inning and won 6-5. Baseball is so conducive to listening on the radio. The Mets’ announcers got into a long discussion about the 1973 Mets-Athletics World Series, in which the As defeated the Mets in seven games. They had a good talk about Ray Fosse, the As All-Star catcher from the 1970s who currently does As radio broadcasts. Among other points, they noted that Fosse, Johnny Bench, Bob Boone, Carlton Fisk, and Thurman Munson were all born within nine months of each other in 1947.

Robert D Schrock as a young undergrad at Wabash College, circa 1905. He won an award for oratory at Wabash and later graduated with honors from Cornell Medical School before working as a doctor in the A.E.F.

While listening I was also doing a bit more digging on Dr. Robert D, Schrock and his World War I experience. He did his basic training at Governors Island in the middle of a heat wave in July-August 1917. Dr. Schrock was one of more than two dozen physicians at New York Hospital who in 1916 volunteered to go to Europe. By this time they fully understood what they would be getting into; it was the year of Verdun and the Somme. And it was not just the doctors; a full contingent of nurses, administrators, and orderlies all agreed to put on a uniform and go. It would have been more, but someone had to stay back and run New York Hospital itself. That is why the board of directors devised a plan deciding who would stay and who would go. Remember, the United States was not in the war yet. Nor was it a given that America would join the fight at all. Had they gone right away it would have been all about saving and repairing the lives of the various nations in the war at the time. Dr. Schrock and the rest of Base Hospital No. 9 arrived in St. Nazaire in late August 1917 and after a bit more training went to various facilities to attended the maimed. Schrock himself spent nearly three weeks in the front lines at the Battle of Passchendaele (Third Ypres), which was already in full swing when the New York Hospital Contingent arrived in France and lasted in November. He and two other doctors were thrown into saving the British, Indians, Canadians, and ANZACS.

Schrock arrived in France as a first lieutenant and returned to the United States as a major aboard the Wilhelmina in April 1919. One gets the impression that his Great War experience was a big influence in his life. An Ancestry search reveals that he traveled at least twice to Europe in the ensuing decades. At least twice. I found conclusively that he returned to France in 1928, presumably for the tenth anniversary of the Great War. He came home from that trip aboard the Ile de France, one of the great and less heralded luxury liners. In summer 1937 he and wife Elizabeth traveled to Germany, returning on the New York in early August. One can imagine the sobering realization that a second world war was imminent hanging over that trip. It’s an incredible story. I know a few people who have been preserving and organizing their relatives’ Great War letters. If someone in your family fought in the war and you have their photographs and letters, I encourage you to document it in some way. The Great War centennial is an opportune time to do it. Each story is another tile in the mosaic.