In the final week of January 1918 the U.S. Navy Department sent out a request to all Americans to please send any binoculars, telescopes, spy glasses, sextants, and visual aids of similar nature to Assistant Secretary of the Navy Franklin D. Roosevelt care of the Naval Observatory on Massachusetts Avenue. This was the second such plea put out by the Navy in the past two months. Binoculars were the most desired item on the wish list. Strictly speaking any items sent were to be loans not gifts; the Navy offered $1 for the use of any item for the duration of the war. The dollar was actually a technicality; government agencies were prohibited from taking possession of any goods without payment. Thousands of packages flooded in to the Observatory over the last five weeks of 1917 and first several weeks of 1918. Still, the need was so great that the Navy issued the second plea.

Apparently word got around too that some people were holding back because they were unsure of if/how/when they would ever receive their items returned. There were enough letters to the editor of various newspapers complaining of packages sent but not acknowledged that Roosevelt felt the need to draft a communiqué explaining that the Navy was doing all it could to address the backlog. He made clear too that, while all items would be duly tagged before being sent to ships, submarines, and lookout points, the Navy could not realistically be expected to return every item to its proper owner. Equipment can be lost or destroyed in time of war. 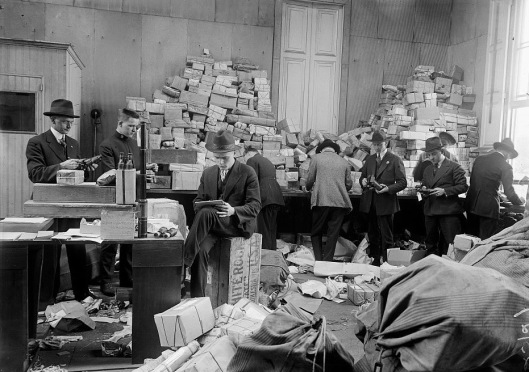 Unpacking binoculars and other visual aids at the Naval Observatory, 1918

The return of items was no small thing. One citizen noted that his binocular set cost $50, which is more than $1000 in today’s currency. One of the reasons the visual equipment was so expensive, and for the shortage itself, was because many of the premier manufacturers of such items were Swiss, German, French, or other European concerns. These makers were either now on the other side in the Great War; or, if the country of origin were an American ally, it was just logistically impossible for companies to send such things. Also, it was not uncommon during the war for manufacturers to retrofit their factories to produce different goods for the war effort. Thus the call from Roosevelt in late 1917 and early 1918.